I'm going to forgo the usual "Here are my goals for the New Year" post because...well, things are still up in the air, plan-wise. We still have no funding to continue the field documentation and excavation (a.k.a. research) of the Six Peaks Dinosaur Track Site (guest blog post on Real Scientists) near Hudson's Hope, British Columbia. This will be Year 2 of an uncertain field season. Right now, I'm just taking my work one day at a time, working on projects that I'm excited about. Some projects are research, while another is more literary in nature.

One of the projects I'm excited about is my science communication, and I must continue, Dear Reader, with my tale of Cretaceous bird tracks from South Korea!

We last left our ichnology heroes on September 13, 2017, at lunch at a Chinese restaurant after a morning of documenting tracks at Dr. Kim Kyung-soo's lab at Chinju University. We timed our lunch and travel to get from the University to Bito Island to hit the right part of the tide cycle, as our prospective field stops were all along the shoreline of the island. Doing field work in a tide-influenced area means you have to be aware of the local tide tables if you want to see outcrop. Our outcrops would be exposed during mid- to late afternoon.

The drive to Bito Island was lovely, with lots of coastal scenery (that does not photograph well at highway speeds). When we arrived at Bito Island around 2:45pm, Dr. Kim pointed out imagery of the Hare and the Tortoise, representing the Korean folktale of "The Hare's Liver." The Hare (representing the peasantry) had to be clever and quick to escape the Tortoise (representing nobility), who was tasked with fetching the liver of the Hare to cure the Dragon King. Here's a link to the story of "The Hare's Liver:" if you know of a better version, please let me know!

Our first stop was a possible reptilian track site. The area is a popular fishing spot, so there was good parking for the boat launches and anglers. We started our hike down to the first track site.
The track site was a small exposure of finely-bedded (layered) silty sand that has some horizontal exposures. Here's Dr. Richard McCrea standing next to the track surface. 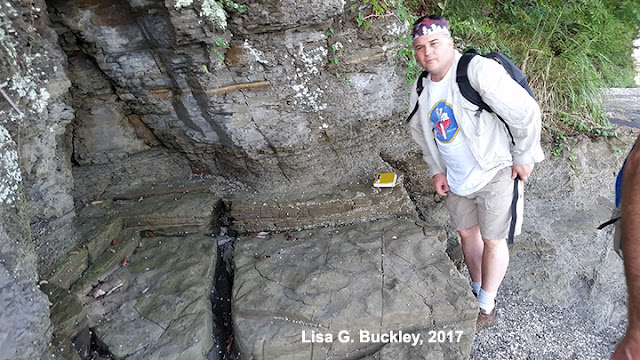 There are a great many similarities between doing fieldwork in South Korea and fieldwork in northeastern British Columbia. First, the bulk of the vertebrate fossil record for the Early Cretaceous in both areas is from the track record. There is skeletal material, but it is not common enough to tell an accurate story of life during the Early Cretaceous for South Korea and British Columbia. Second, both areas are heavily vegetated. We have to rely on either natural exposures along waterways and mountain tops, or those rocks exposed by the extensive industrial activity in both areas.

One thing we do not have in northeastern British Columbia is intertidal invertebrates occupying the track surfaces. Thankfully these snails were huddled in the cracks on the vertical part of the rock exposure and didn't hide the tracks. 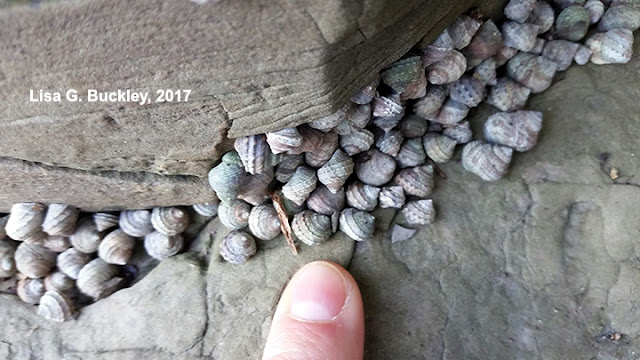 Here is a close-up of the tracks exposed on the surface. They are very likely tracks of a large, Early Cretaceous turtle. 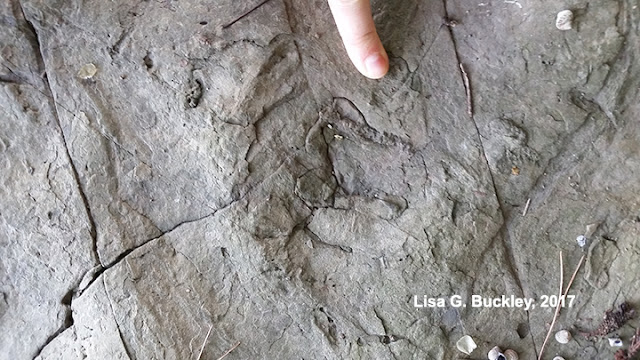 Our next stop was a larger track site that was a short car trip and a short hike away from Stop 1. It was a glorious day for a walk along the shoreline, and the scenery was beautiful.
The track site is where the didactyl (two-toed) theropod tracks named Dromaeosauripus jinjuensis (Kim et al. 2012) were discovered (link to paper abstract).

We spent a little time sweeping off the small shoreline pebbles that covered the track surface.
Here is a close-up of a section of the Dromaeosauripus jinjuensis trackway. Do you see the large theropod track stepping on the trackway? 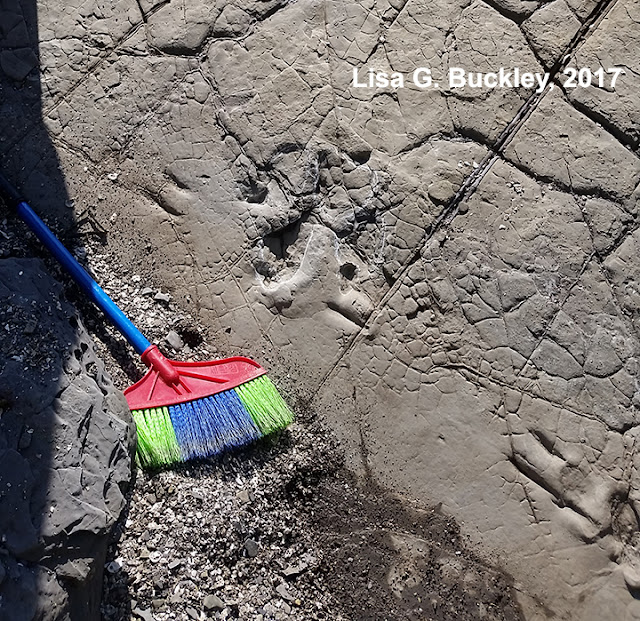 Once we uncovered the Dromaeosauripus jinjuensis trackway, Rich got to work taking the pictures for a photogrammetry model.
Site visits such as these are an important part of fossil heritage conservation. This trackway was described in 2012, but that doesn't mean that once it is published that it is forgotten about. This track site (and any other fossil site) will be examined every year to monitor its condition.

While the photogrammetry was taking place, I started hunting out my quarry: bird tracks! At this site, the smallest tracks we would see were those of Dromaeosauripus. We did see tracks of a small sauropod (think Brontosaurus for the trackmaker) on the same surface.
While I did not find any bird tracks at this track site, I did make a new friend. Meet (tentative identification) Scolopendra subspinipes, sometimes known as the Orange-legged Centipede. 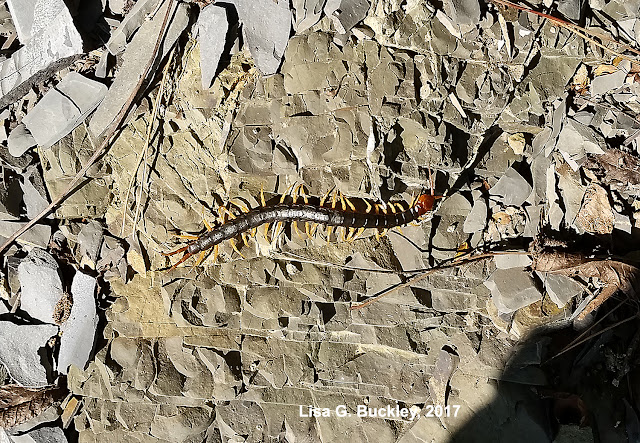 I'm not the largest fan of encountering critters with more than six legs. I have been known to perform the Spider Dance at inopportune times. One such time was while using an outhouse in the field...admittedly not my most dignified moment. Thankfully I didn't find my new friend on my leg or in my backpack, although I did close all of the zips on my backpack after taking pictures of the centipede.

We were approaching 4:30pm when we went to the last field site for the day: a long stretch of shoreline on which large ornithopod tracks had been discovered. I immediately went into bird track mode and started with the rocks exposed near the edge of the forest. 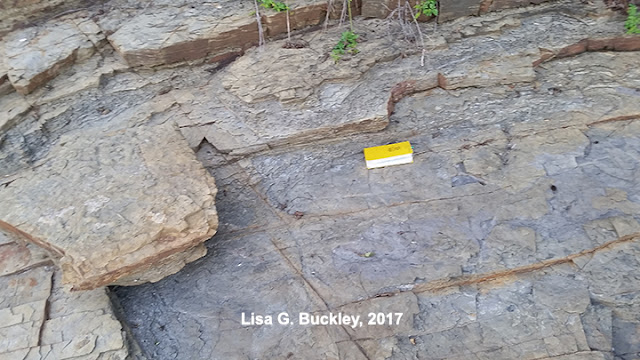 I did find a suspicious-looking small trace, but there was not enough of it exposed for me to be sure that it was a vertebrate trace. 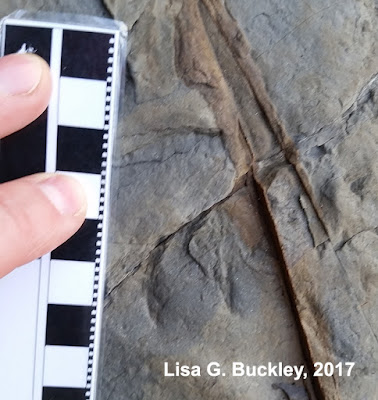 I also came across a medium-sized theropod track. 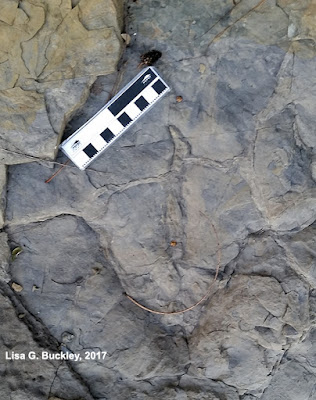 At this time the light was beginning to fade. Lighting plays a huge roll in seeing tracks in the field. The dimmer the light, the less likely you are to see small tracks. The best condition for seeing bird tracks in the field is a bright sunny day that casts shadows on low-relief surfaces. These were not ideal light conditions.
I started working my way down to the edge of the water around 6:30pm. I'll be honest: I was not expecting to find bird tracks this late in the day. I was still looking, but I knew my chances of recognizing bird tracks were slim. What caught my attention were all of the tiny hermit crabs. I knelt on to the wet, slippery rocks to try to get a picture of the hermit crabs...and my brain focused on a familiar pattern on the rock.

I called people over, and we immediately started outlining the bird tracks that we could see using white chalk. Because this is a tidal-influenced area, Dr. Kim and his grad students began to salvage the track surface for removal back to the lab. 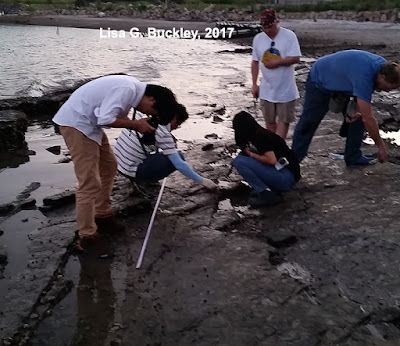 This part made me extremely nervous because the rock layer the bird tracks are on is very, but the surface came up in good condition. It turns out these were the first bird tracks to be found at this particular locality on the island. This was a good year for me finding bird tracks!

This was a full day! After we deposited the tracks in Dr. Kim's lab, we went to dinner at a sushi restaurant and ate more sushi in one sitting than I ever have in my entire life. We made it back to the Happy Owl Hotel by 11:00pm.
I downloaded all of my pictures and updated my field notes, and was definitely ready for bed at 11:30pm. The next day's adventure would prove to be just as busy, as we would visit the Jinju Innovation City track sites, and the Gajin-ri track site!