(I'll see myself out. Oh, wait: this joke needs context.)

Our field season in northeast British Columbia is comparatively short. We usually confine the bulk of our field activities to July and August, with June and September-October reserved for shorter field excursions. The weather is twitchy in September: one day it may read 20C on the thermometer, and the next day there may be a dusting of snow on the lawn.  I am admittedly not a cold-weather person: when we recovered a slab containing an isolated tyrannosaurid track in late December, I received small patches of frost bite on three of my toes while wearing heavy boots and wool socks (to be fair, those boots were old). Any field work we can do after the end of August without turning into ichnocicles is bonus field work.

Yesterday we (me, Rich, and our field assistant Tammy and volunteer Linda) did a day-trip into a newly explored canyon with Early Cretaceous outcrop. We're not exactly sure where we are in terms of the rock layers (also known as the stratigraphic section) as all the mountain building activity has crumpled and folded the layers like Wile E. Coyote running head-first into a canyon wall. From the pictures brought back by our volunteer field crew, we could see that there were some interestingly small tracks on the near-vertical rock face. They were at standing height, which was a welcome surprise for us, since most of our vertical track exposures require ropes to access. That was the good news. The less than good news was that the tracks were coated with a layer of our old crusty friend, the Lichen.


Lichen, while a fascinating symbiotic organism, is a bit of a pain in the butt when it comes to ichnology. Lichen has its own topography, and it can obscure fine details on track surfaces. Lichen is also a pain to remove. Mechanical scraping is out of the question for tracks as it would scrape off all the cool details (skin impressions, behavioral traces), so we have our chemical method of removing lichen.

I talked about this method a bit in the post about Paxavipes babcockensis, the third Cretaceous bird footprint to be named from Canada. Here I'll show how to employ the techniques of Buckley and McCrea (2009) in field settings.

The morning started out foggy and frosty, with the thermometer reading 1C. Welcome to fieldwork in the Peace Region in September! The weather at this time of year is twitchy, so I layered up in long underwear. We knew it would warm up during the day, but this site is in the bottom of a steep-walled creek canyon and receives little sun, so no matter how warm it was going to be outside of the canyon, inside the canyon it would remain cool and damp.

I packed down the bleach treatment supplies. We needed:
When I say steep-walled canyon, I mean STEEP. The slope was nothing more than large loose boulders held in place by moss. Moss makes for a cushy soft hike, but it is not considered a reliable industrial adhesive, so we had to be very careful. Every step down had to be tested before trusting my weight on the seemingly secure surface. Field Work Tip: don't EVER be in a rush to get anywhere. That's how accidents happen. Fortunately we made it to the bottom of the canyon incident-free.

Unfortunately I can't show any images of the traces at this moment. They are going to be part of a paper that I'm working on with several coauthors, and many journals have strict rules on talking about what you're going to publish before you publish it. Hopefully I'll be able to talk about it until your eyes bleed. Soon. 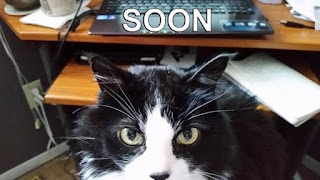 First, I gave the track surface to be treated a good brushing with the stiff brush. This was to remove any extra clinging dirt, and to rough up the lichen surface so that the bleach treatment could soak in.


Next, we soaked the cheesecloth pads in the bleach solution (wearing our safety gear!) and pressed them on to the surface.


After the soaked cheesecloth was applied, we covered the entire works with plastic cling film.


You know how cling film only sticks to things you don't want it to stick to (itself) and refuses to stick to anything else? That's where the Gorilla Tape comes in. All of the edges and seams of the cling film were firmly taped to the wall. This keeps the bleach solution from drying out before it has a chance to work, and keeps the soaked pads firmly pressed against the lichen. The tape and plastic also keep the treatment from oozing down the slope.


Now we had nothing to do but wait. We had applied the treatment by 12:30pm, and I checked it every half hour. Once the lichen was soft enough to remove with a firm scrubbing with the sponge (2:15pm) we gave the surface a vigorous scrubbing and washing. Once the surface dried, Rich took 3D photogrammetry images, and then we did a latex peel of the surface.

We always do a physical replica to accompany the digital replica for important, novel, and published specimens. Digital replicas are great for sharing, and for taking large-scale tracksites back to the lab on your hard drive, but a digital replica will only be as good as the technology at the time it is created. Physical replicas (when done correctly) are exact replicas, and won't be lost to the Blue Screen O' Death or a hard drive failure. Collections managers are paid to be paranoid.

We had limited daylight, so we applied a nice thick coat of museum-grade latex (sweet or low-ammonia latex) to the surface. Don't let its appearance fool you: it may look like cream cheese frosting, but it smells like cat urine.

Now we are waiting for the latex to cure. Latex takes a long time to cure in cool damp conditions. Recover it too quickly and it will still be a goopy mess. Recover it too late and it will freeze and fall apart. Silicone would face the same issues: it doesn't cure well (or at all) in the cold, and the cure is inhibited if there is a hint of sulfur in the rocks (which there is).

In the end, we'll have a great additional specimen to the paper, a nice new replica to curate in the fossil archives, and another bonus fieldwork day accomplished. Not bad for September!