We all have our hobbies, after all.

Yesterday (Sunday, May 15) our dojo did our annual highway cleanup. Having recently received the renewal for our institution's wildlife salvage permit, I was on the look out for recent roadkill. Birds and small mammals are all my recovering dermestid beetle colonies can handle at this point (thanks, wolf spider), but besides a couple of very flat mice, there was no roadkill to be had.

What we did see, when walking over one of the highway bridges close to the local boat launch, was a railing full of raven traces in the form of poop (yes, it's feces, but poop is more fun to write) and regurgitated pellets!

Most people are familiar with owl pellets or regurgitates. Owls tend to swallow their prey whole or in large chunks. Bone, fur, feathers, scales, skin, exoskeletons, and anything that the prey was eating (seeds and vegetation) are all swallowed. The gizzard of the owl compacts all of this hard to digest and indigestible material into a pellet, which the owl later regurgitates.

Owl pellets are fascinating, and form the base of a really fun educational activity: owl pellet dissection! It's a wonderful way to demonstrate the food web and predator-prey interactions, and predator diets. Owl pellets are also an invaluable source of dietary data for ornithologists studying the prey of target owl species. Owl pellets can also provide insight into the preservation of small mammal fauna from Cenozoic sediments: a paper by Terry (2004) examines what happens to the pellets of extant Great Horned Owls (Bubo virginianus) as they break down in a temperate forest environment. This another great example of how studies on modern ichnology (pellets are traces of an organism, so they are 100% in the realm of ichnology!) give us a better understanding of fossil ichnology.

Owls are not the only birds that regurgitate pellets: birds of prey, gulls, herons, cormorants, shorebirds, and corvids. Bird species that consume a great deal of indigestible material with their meal are likely to hack up pellets.

This morning I went to the bridge to see how many raven pellets I could collect for our institution's summer educational activities. We already have a Barn Owl pellet dissection activity, but Barn Owls are not native to northeastern British Columbia. The Common Raven, however, is ubiquitous in our region.

It was easy to see which side of the bridge the ravens preferred to perch on: the side that is closest to the boat launch. Our local ravens figured out that where there are trucks, there are people and the tasty things that people leave behind.


Clearly ravens spend a great deal of time on this railing. 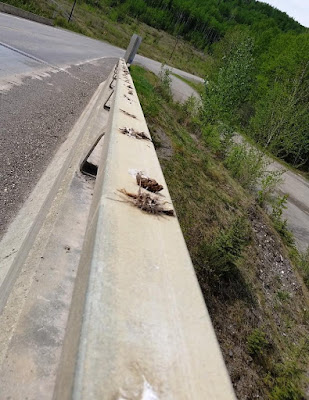 I set to work choosing my samples. It was clear which deposits were pellets, and which ones were raven poo. 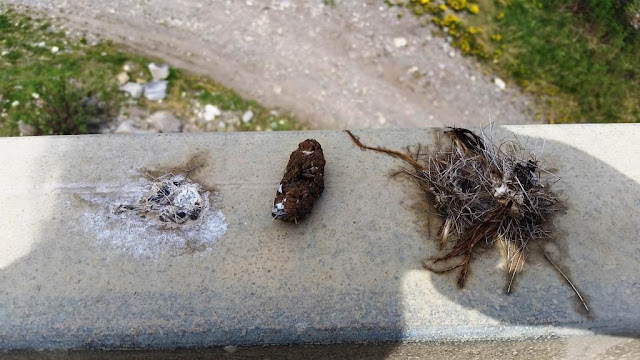 I did not arrange these deposits for the photo. The deposit on the far left has passed through the digestive tract and was deposited via the cloaca: you can see the white material (uric acid) and the small mounds underneath the uric acid. The deposit in the center is a nicely intact pellet. There is white material in the pellet, but it is solid, thin, and fragments of a once larger object. Our working hypothesis is that it is eggshell that this particular raven picked out of the trash. The deposit on the far right is full of fibrous vegetation and uric acid. It may have been a pellet that was later pooped on, or it was fecal in origin and has weathered a lot before I came across it.

I collected two intact pellets, and have passed them on to our Education Coordinator who will now heat sanitize the pellets. This site is easy to access, so we have the opportunity to collect more throughout the year. Once the pellets are sanitized, the kids participating in the Owl Pellet Dissection can compare the diet of a Barn Owl to that of their local Common Raven.