Spring is in the air, and with spring comes the traditional Spring Cleaning. Spring Cleaning is not something one thinks about when they think "flesh-eating beetles", but in our case it was high time that the Homeworld Colony received a thorough mucking out.

Dermestid beetles do like to frolic in their own filth, but sometimes that filth (beetle feces, chewed up bits of paper and foam, hair and feathers from specimens they process, shed carapaces/exoskeletons) builds up to the point where either 1) the beetles can reach the top of their enclosure and mount a Great Escape, 2) they become so busy with roaming around the catacombs of their filth that they forget they have a job to do, or 3) their much-loved filth becomes soggy, matted, moldy, or plain unnavigable. At that point, it is time to muck out the colony.

Let's look at the brief history of the Homeworld Colony. This colony used to be home to my colony of Dermestes maculatus, the Hide Beetle. These are the most common dermestid beetles used in laboratories and museums for defleshing skeletal specimens. I have two experimental colonies of Dermestes lardarius, the Larder Beetle or the bacon beetle. These dermestids were wild caught, and by that I mean I collected them from around Maia's (my cat) soft food dish, or they were given to me by very understanding friends. NOTE: you know a person is a really good friend if they don't mind you crawling around their baseboards and kitchen looking for beetles and their larvae.

Except that Homeworld's processing speed started to lag. No progress was being made on any of the specimens. I could see beetles in the colony, but the colony was not teeming with activity. This past fall we discovered that a Wolf Spider had entered the colony. I have no idea how long it was in there, but I'm sure it had a fine time snacking away on my defenseless beetles.

There are many reasons a colony can collapse, and sometimes it is necessary to give the colony a "fresh" (if that term may be used for dermestid beetles and dried heads of animals) start. Today our field assistant Linda and I decided to hit the colony's reset button and give it a good cleaning.

You can see that there are several layers of beetle activity captured in this colony. Foam, cardboard, fur and feather form an organic stratigraphic column that shows when each specimen was processed. This colony had not received a thorough cleaning since it's start date in 2013.

First we brought everything outside, and donned our eye protection, particulate masks (I do not want to breathe in beetle poo), and gloves. Next, we removed all of the in progress specimens from the colony and placed them in the receiving bucket. This included a cougar skull, a wolverine skull, a White-winged Crossbill, a Purple Finch, and a Swainson's Thrush. 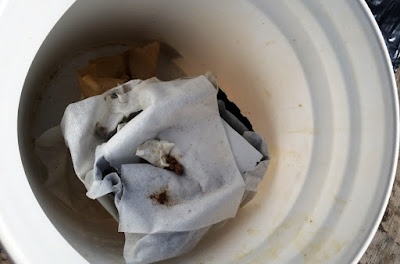 Once the specimens were removed, we had to sift through the refuse to salvage as many living beetles as we could. We did a couple of handfuls by hand...


...before we said "Hey, we're not just biologists: we're also geologists! We have screens!" and brought out a 2 mm screen. This saved us a lot of time and the lives of many larvae and adults.


We made sure to save the beetles "apartment buildings", or the foam in which the larvae like to burrow to pupate.

It was a great day to be outside. We were treated to a serenade by the European Starlings. These starlings had quite the repertoire of songs: we heard mimicry of Red-tailed Hawks, American Robins, and a Western Meadowlark.

We also saw that love was in the air, bird-style. A male and female House Sparrow landed on our garbage bin and proceeded to mate in front of us. Linda took a couple of photos and a video. The video shows the last of five matings. 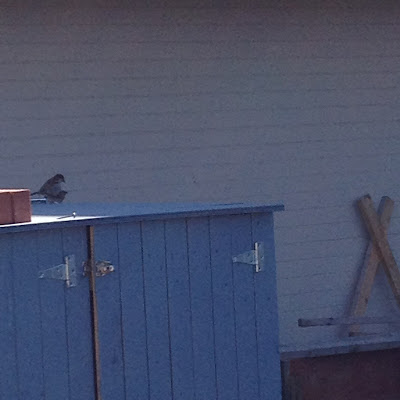 After all of that sifting and sorting, we did not find as many beetles in the lower layers of the colony as we had hoped. The colony was slow in its processing speed simply because there are not enough beetles in there for visible progress. All of the newly found beetles will be added to this colony to give it a boost while the survivors slowly rebuild their numbers. Stay tuned for progress reports!