Regardless of the snow that is on the ground as I type, this is the time of year our planning kicks into high gear for this summer's field season. We have an exciting new dinosaur ichnology project (for new readers, ichnology is tracks, traces, and other "signs" left by dinosaurs other than their body parts), thanks to the sharp-eyed residents of the Peace Region who reported the site to us, and the guarantee that we can operate this year.

"Wait, Strange Woman - didn't you say you were office bound this summer in your last post?"

Indeed I am, friends. However, that doesn't mean I'm not hard at work ensuring the field season can happen for my Research Team. As a Museum Of Unusual Size (MOUS), we struggle every year to not only convince the Powers That Be that our institution (the Peace Region Palaeontology Research Centre) is a worthy project for conserving, archiving, researching, and interpreting British Columbia's fossil heritage, we have to justify WHY research should be funded. We have no access to research funding through provincial or federal means. We always approach the natural resource companies operating in the region for potential partnerships, and are usually given the same rebuff: "Our head office decides funding levels based on population size. You live in a small population center. You will get a small amount." Trying to convince them that this project is regional and provincial in scale does not make an impression.

This year we're trying something different. Two days ago I launched an Indiegogo campaign to crowd fund the research for our Williston Lake Tracksite (link to the "Research Dinosaur Tracks in Northeast BC, Canada!" campaign site here.)

The new Williston Lake Tracksite is a large, flat exposure of the Gething Formation (Early Cretaceous, approximately 115 million years old). Dinosaurs in BC - and specifically dinosaur footprints - have a long, but little known history in the province. Tthe cultural history of many British Columbia residents of European descent (there may be First Nations historical recognition for the tracks - still hunting out info) has long assumed that "there are no dinosaurs in BC, they're found in Alberta" - I heard this so often growing up in BC that I wanted to scream. However, dinosaur prints were first found in northeast BC by geologist F. H. McLearn in 1922-23. Paleontologist Charles M. Sternberg led the first paleontology expedition to the Peace Region in 1930.

C. M. Sternberg named many new ichnotaxa (footprint types) from the Peace River Canyon Gething Formation sites in 1932 and on. This was the first extensively published description of Cretaceous tracks as a footprint community (ichnofauna). Several ichnotaxa were named:

Amblydactylus gethingi - here's a footprint and handprint pair from a different tracksite, not the original Sternberg locality.  Amblydactylus is thought to be made by a dinosaur related to Iguanodon. 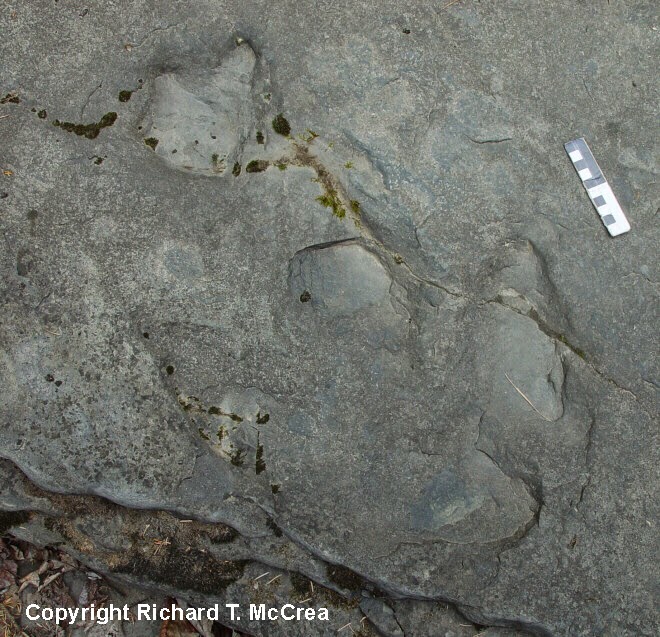 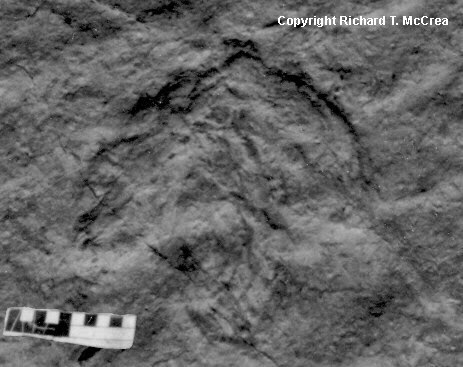 The small theropod footprint Irenichnites gracilis. This specimen is not from the original Sternberg localities: 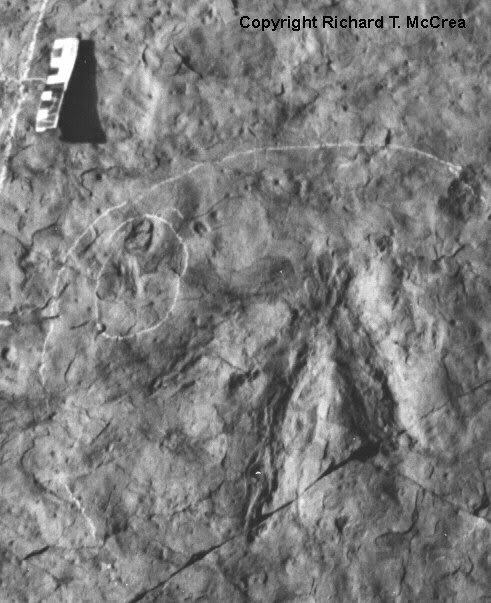 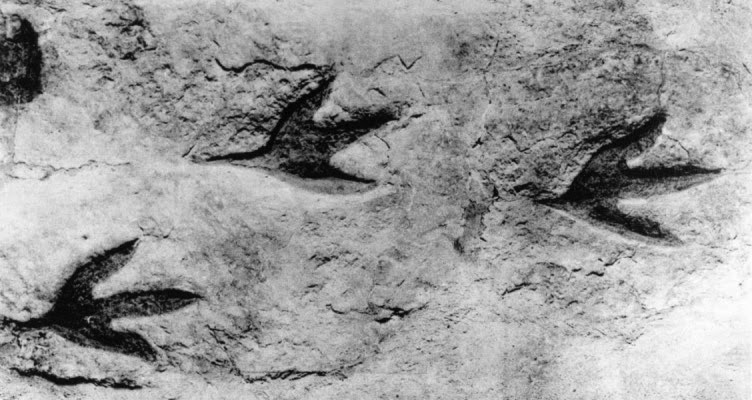 Last, but certainly not least, the ankylosaur footprints of Tetrapodosaurus borealis (image not from the Sternberg localities, but from our Flatbed Creek Trackway Tour site): 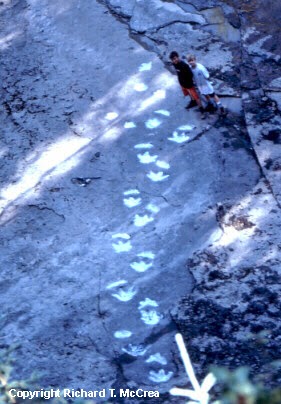 Later, Currie (1981) named what was, at the time, the oldest bird footprints known, and the second
bird footprints named from North America: Aquatilavipes swiboldae.

There are two things I'm sure you have noticed by now:
1. The Peace River Canyon tracksites are important. Several type specimens come from there, and they are an important part of not only British Columbia's history, but the history of paleontology. The Province of British Columbia agreed, and in 1930 the Peace River Canyon site was designated as a Provincial Heritage Resource. Cool, right?
2. Most of the images are not from the original Peace River Canyon localities. Why? The Peace River Canyon localities, a Provincial Heritage Resource, are now flooded under the "Dinosaur Lake" reservoir of the Peace Canyon Dam. Despite a huge salvage effort by the Provincial Museum of Alberta (now the Royal Alberta Museum), led by paleontologist Dr. Philip Currie between 1976-1979 that recovered over 90 footprints, mapped 1000 prints, and in total documented 1700 prints, the sites and the in-place tracks were lost to future science, science outreach, and tourism opportunities.

This new site, the Williston Lake Tracksite, is the first large-scale track-bearing surface from the Gething Formation that has been seen since the flooding of the Peace River Canyon. We have this fantastic opportunity to continue Sternberg's and Currie's work.

First, we simply need to documenting the site. It won't really be simple: there's A LOT of site to be cleared (in yellow): 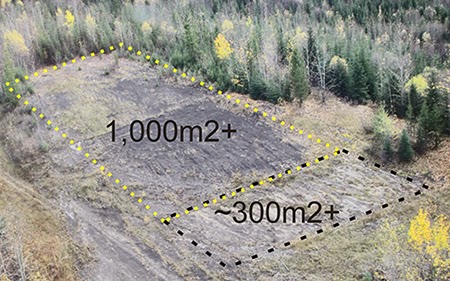 We need to map all of the footprints in place as they appear on the surface. We need to take latex and silicone molds of significant footprints and trackways. We also need to 3D-digitize the ENTIRE site.

Why do we need to do this?

We need to know a) what track types are there, b) what proportion each track type is in this slice of the paleo-ecosystem, and c) update or revise Sternberg's footprint identifications (as needed) with our advanced understanding of how footprints work - Sternberg did a great job in 1932, but our understanding of footprints has increased and changed a lot since then, and since the original Sternberg sites are inaccessible, we have this golden opportunity to research a site that is as close to what Sternberg saw as possible.

We can't miss this scientific opportunity. This is why we need your help. Some of the tracks are exposed, and we know from experience that the longer tracks are exposed, the more likely they are to be damaged by weathering (slow) and human selfishness (fast). We need to get in, uncover, document, and securely cover the site this summer. To do this safely and efficiently we need to replace our old equipment (truck, all-terrain vehicle) and pick up a new item: a secure cargo trailer in which we can store gear (we've had all of our sites robbed) and store specimens. We also need to feed our crew of staff and volunteers.

Once this site is documented, we hope that it can one day be used as a science-based tourism initiative. Our research this summer will be the basis for all of the exciting stories we'll discover about Early Cretaceous dinosaurs. We want to bring the Peace River Canyon tracks from their watery obscurity, if only by proxy, and tell their story to the world.

You can help us tell that story. The most important way you can help is to share the "Research Dinosaur Tracks in Northeast BC, Canada!" site with anyone interested in history, heritage, dinosaurs, and science education. If you have the means, we would greatly appreciate any contributions.

I know we can do this.