We've made it to September 16, 2017, when our Ichnology Heros are scheduled to give talks to the public at the Goseong Public Library! When we go to another country to do research, we always offer to give a local talk on the work we do in Canada, and how the local fossil record fits in with our work on a global scale.

Giving a talk in another country where the language is not your primary language is not that different (in my experience) than tailoring an academic talk to a public audience:

1. Keep the jargon to a minimum. There's always a way to explain even a highly technical test or feature using non-technical language.

2. You may understand your graphs, but remember: you've been staring at them for months or years. No blob of ambiguous data points on a graph with itty-bitty axes, no series of fifty graphs that only have really subtle differences. If you use graphs, make sure the meaning of the graph is crystal clear.

3. Pictures are worth a thousand words. If you can describe it, see if you can also show it. Outline hard to see details for your audience. If you're showing a picture of a single bone or a footprint, also show an image of the animal it came from (or the closest representative).

4. Remember - especially when your audience is in another country - that jokes/witticisms are often colloquial and have local or specialized meaning. it may fall flat. Also, "those jokes" (which are really just methods used to belittle groups who have less representation and/or power) about gender, race, jokes about sex, sexual innuendos, or sexual imagery, or jokes about political situations are in really poor taste, no matter your audience. They have no place in a talk communicating science to any audience. No one wants to see that nonsense.

5. If a translation is necessary, remember that this will (at least) double the time it takes to give your talk. Make sure you are not talking in huge paragraphs: your translator is going to have to remember what you've said and be forced to summarize your long rambling monologue to a more concise sentence or two.

We were told ahead of time that the audience would be a mix of children and adults, so I made sure to travel with my Bird Glamour makeup kit! I don't often have an opportunity to do a Bird Glamour for an extinct species of bird or avian theropod (although I did rock Anchiornis at the 2017 Society of Vertebrate Paleontology meeting during the auction/social event!) I was excited to do an ichnology-themed Bird Glamour.

This ichnology Bird Glamour was inspired by Ignotornis gajinensis, the bird trackways that have spoonbill-like "swooshes" preserved. These "swooshes" are similar in shape to the bill marks made on sediment by present-day spoonbills stirring up the sediment to catch fish and invertebrates. 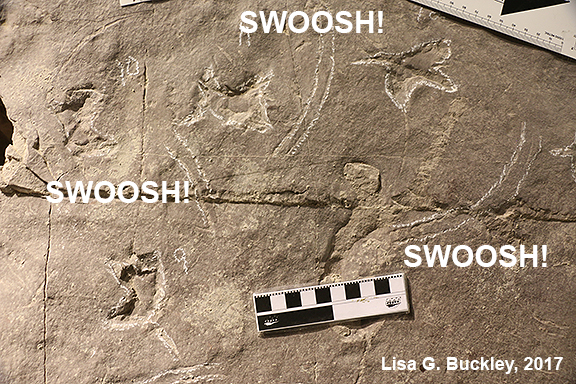 These looks can take anywhere from twenty minutes to an hour to create. Once I was done, Sujin asked if I could do her eyes up as an owl. Sujin chose a Long-eared Owl, and I was kindly given the use of the curator's office to apply Sujin's Long-eared Owl look.
This was the first time I had given a public talk while wearing Bird Glamour. I admit to being a trifle nervous about it: people sometimes have a very specific stereotype image in mind when they think "scientist," and that image does not typically involve makeup, let alone bird-inspired makeup. Nevertheless, I opened my talk by introducing Bird Glamour and used the link between the Black-faced Spoonbill and Korea's fossil bird tracks to talk about the bird tracks of western Canada.
The talks were very well-received: there were a lot of interesting questions from both the kids and adults in attendance. We went out for our last dinner in South Korea: bulgogi! After dinner, we went to Dr. Kim's lab for one last push to get as many tracks documented in our time remaining. We were at the lab until at least 11:00 pm local time.

Our flight from the Incheon Airport wasn't until the early afternoon, but we were scheduled to take a bus from Jinju to Incheon. The bus was scheduled to leave Jinju around 5:45 am. We were up, packed, and waiting in the hotel parking garage for our ride to the bus station at 5:10 am.

Things got...interesting. We saw some of the Jinju night-life as young people started returning home from what I assume was a fun Saturday night. Then a young woman staggers down the road. She is still in a partying mood and is very eager to give us cigarettes. She tells us in her limited English that she is from Russia, and that she doesn't speak [insert derogatory term here]. To directly quote my field notes from that morning "Charming that one of the few English words she knows is a slur. :| " While this interaction was taking place, I was scanning down the road to make sure that she was not distracting us so that an unseen companion could rob us. Before long Sujin arrived with an additional cab to take us and our luggage to the bus station. Rich gave his gift of cigarettes to our cab driver.

We arrived with plenty of time to get our boarding passes for the bus. These buses are glorious: truly comfortable seats with nice headrests and copious leg room. We slept until our rest stop about halfway between Jinju and Incheon Airport. We breakfasted on roasted chestnuts purchased at the concession. If you've never had roasted chestnuts, they have a soft texture that is slightly sweet.
We arrived at the airport with plenty of time to spare. This was good because it gave us a chance to repack our bags to make sure we didn't have power sources, like a solar battery charger, in our carry-on luggage. We found this out when Martin (who was flying out of Incheon first) was pulled out of line during his bag scanning to repack his bags. Oops. You can travel a million times and still miss an item or two.

Our flight back to Canada was uneventful, which is the best kind of flight! Usually, on a flight and while waiting in airports I type away on writing projects and papers. Sometimes I try to read if the jetlag isn't too powerful. I felt the jetlag start to hit me hard while we were waiting for our flight from Vancouver to Fort St. John. Jetlag gives me a very disconnected feeling: I feel as though I'm moving at a different tempo than that of the rest of the world. I also tend to feel as though all of my sensations have been muted.

Then, of course, there's the struggle to reclaim your original sleep schedule. This can take anywhere from a couple of days to over a week. My advice: don't try to do a hard reset on your sleep schedule. Day Three after we had arrived home, we forced ourselves into a "normal" day by doing a day trip into another community. We were out of the house at 9:00 am and in bed around 11:30 pm. The next thing we knew, we were waking up the next day at 3:45 pm. Just let the jet lag run its course.

That is the end of our tracking adventure in South Korea! Now we have several scientific papers to write on all of the data we collected! Hopefully, I'll be able to give you updates on those papers soon!
Posted by Lisa Buckley at 6:10 PM