I'm excited to continue with our tale of Cretaceous tracks in South Korea! September 15 was our day to check out the coastal dinosaur track sites in Sangjogam County Park, a heritage site. This was a track site that Dr. Richard McCrea had visited back in 2000 on his first trip to South Korea. He said to me "I did not expect that I would ever get a chance to visit this site again."

A LOT had changed since Rich's visit in 2000. At that time the area was newly discovered and in the process of being documented. Let's just say, the progress made on the site was impressive!

After breakfasting and grabbing some Starbucks (science runs on caffeine all over the world), we drove to the parking area next to the coastline. We were immediately greeted by a great sauropod sculpture surveying the gorgeous shoreline.

The entire area around the Goseong Dinosaur Museum was developed to celebrate the dinosaur track sites. The sidewalks also celebrate their fossil heritage.
Of course, a sandy beach is a glorious place to look for present-day bird tracks. Today was a day for gull tracks.
This was the best picture I could get of one of the gulls roaming around the beach that morning. It's carrying a mussel in its beak, so the appearance of a black ring on the bill is artificial. I also didn't pack my binoculars that day, so my identification of this gull is "gull." The gulls did leave some nice trackways.
There was also some interesting behavior exhibited by the gull tracks. Check out this landing trace of a gull: you can see the long drag mark left by the hallux (backward-facing toe) running down the middle of the scuffed-looking footprint. I used this image for my weekly Twitter ichnology game #NameThatTrack. 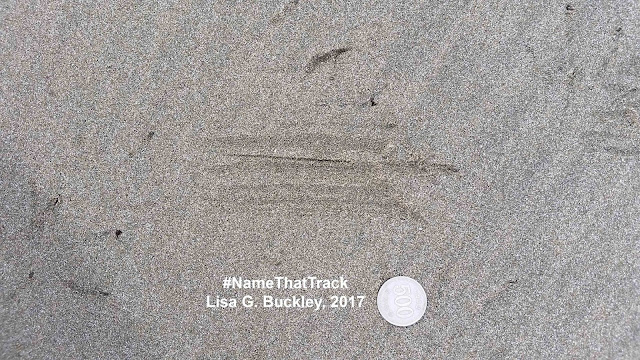 Of course, I couldn't spend all day on the beach taking pictures of modern footprints (although this would be a worthy ichnology project.) We made our way over to the Goseong Track Site.

The most obvious trackways on the site are sauropod trackways.
While we were on the site, we found ourselves in the middle of a couple of school groups doing a geology-based field trip assignment and tour on the track site. We ended up being part of the tour, with the students watching us take photos and asking us questions. We also ended up signing autographs on their site brochures! That felt...odd. I mean, I was not involved with finding or developing the site, but I suppose they appreciated the chance to interact with dinosaur track scientists on the site.
There are several track types on the Goseong Track Site. Here is an ornithopod trackway, with the tracks outlined with dashed lines. 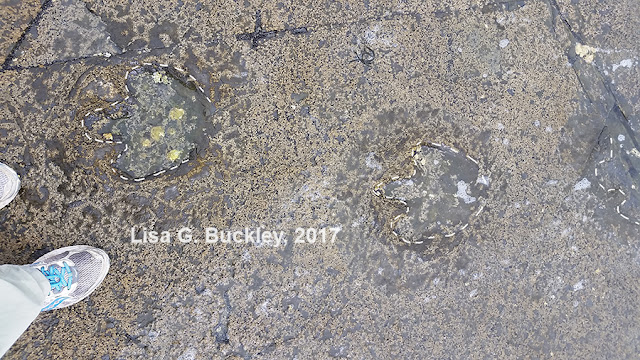 With coastal rock exposures, particularly those that are periodically covered by tides, we don't expect that tracks will "last" that long. Tides are powerful, running sand and shells over track surfaces. They also form tidal ecosystems: it's not uncommon to see dinosaur footprints doubling as tidepools. Given that tidal-influenced areas are generally high-energy, I was not expecting to see bird tracks at this site. I moved a little farther away from the shoreline to check out some fine-grained surfaces. I was not disappointed!
It was an overcast day, so the light was fairly dim and there few shadows being cast on the track surface. These were great conditions for getting photogrammetry images of the sauropod and ornithopod trackways, but the dim light made seeing bird difficult. Like I've mentioned before, lighting is everything when it comes to recognizing tracks.

The Goseong Track Site was impressive for another reason: the level of resources and development that went into making the site accessible to the public. When I show these images, remember that only 17 years prior this area didn't have the track sites developed or a dinosaur museum built. 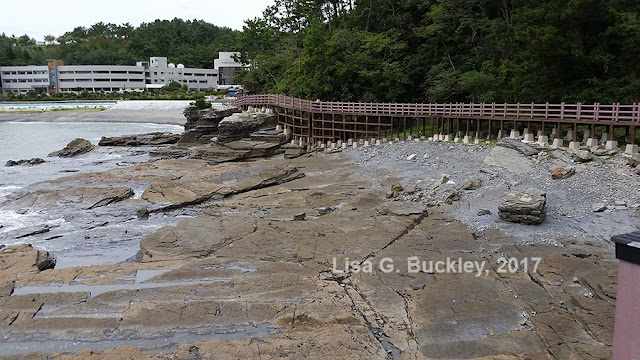 First, there are the extensive walkways built along the coastline so that people can look over the track surface. There are several kilometers of these walkways! At key points along the walkways are informative signs that direct visitors' attention to key geologic and paleontologic views. 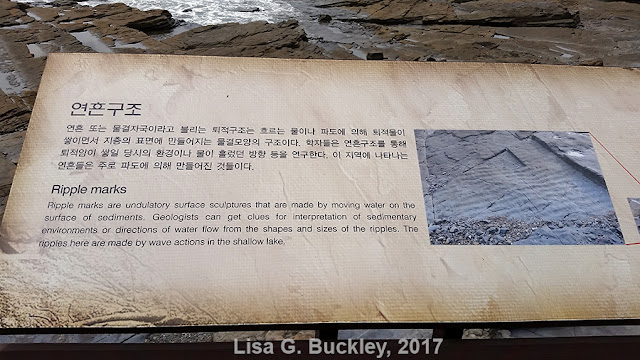 Editorial Note: OK, friends, I need to go on a bit of a rant. Look at this sign. It gives out science information without talking down to the reader. Do you see any cheap, lazy Jurassic Park-themed lettering? Any sensationalized attempts to use giant waves in "storytelling"? You do not. I did not see ANY sign of the North American-style insulting "tourism marketing" in South Korea. This is because the organizations that made these signs actually respect the intelligence of the people who are visiting natural history sites. They don't assume that there is "too much science" in the information provided, or that the public needs to be "talked down to."  Each time I see a fossil heritage site that blatantly uses Jurassic Park imagery and/or sensationalized "stories" to interpret a site, I assume the organization that created those signs does not respect their visitors OR the fossil heritage they exploit. Respect for fossil heritage or those interested in natural history isn't even on the radar for those particular organisations: fossils are merely a thing to selfishly use, and the public are just their dupes with wallets. It makes me feel angry and ill. Oh, and the fact that, since Rich's 2000 visit, a museum and outdoor interpretive sites had been fully developed? It is extremely frustrating to see the slow progress of getting similar dinosaur track sites developed in North America. We've been in the Peace Region full-time since 2004 and we still struggle year-to-year to have fossil heritage conservation funded.

We hiked up to another track site that was not yet interpreted: one of the aspects of coastal geology is that it changes a lot, with new rock surfaces constantly being exposed. Rocky cliffs are also a tricky place to do ichnology, mostly because of the ever-present threat of those tracks using gravity to make face-time with you. Here are some bird tracks exposed on the underside of a rock exposure. We couldn't get a close-up view of them, but we could tell they were the ichnogenus Jindongornipes.
We continued our hike up from the coastline boardwalk to connect with the outdoor trails and displays of the Goseong Dinosaur Museum. Again we were treated to a glorious sight: great outdoor displays that did not shy away from interpreting science.
All of the outdoor dinosaur sculptures were time-appropriate to the age of the tracks exposed at the Goseong Dinosaur Track Site: Early Cretaceous in age, roughly 120-100 million years old. We did not see any Tyrannosaurus rex or Triceratops models, which are 66 million years old. This was another sign (to me) that the Goseong Dinosaur Museum wasn't relying on sensationalism (a.k.a. all cool dinosaurs are T. rex!) to interpret their fossil heritage.

The Goseong Dinosaur Museum also had some fun with their outdoor displays. I love this cartoon bird pointing out the names of the bird tracks. 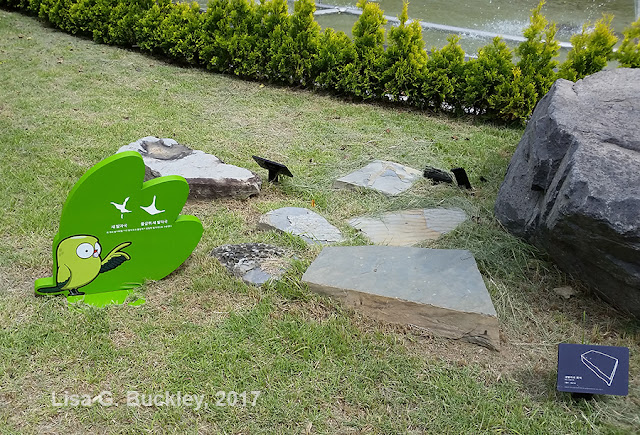 We stopped for lunch with the Goseong Dinosaur Museum curator at the museum's cafe, and were treated to a wonderful beverage: quince tea that the curator made! We found out the recipe, but darn it! We can't seem to find quince anywhere in grocery stores. The hunt continues!

After lunch we spent some time in the collections facility of the Goseong Dinosaur Museum, collecting data, photogrammetry images, and track slab tracings.

We worked until evening, and then went out for dinner at a restaurant whose name roughly translates to "The Broken Bone Restaurant." It was a great dish of stewed meat on the bone, served with fried rice.
It's no secret that I like spicy foods. Do you see the green chilis on the dish to the left? Up until this point, I had been munching on these peppers like they were candy. Tonight was the night that I found out there are two types of long green chilis: mild and spicy. I caused a great deal of amusement as I sat there, eyes streaming, face flushed, laughing at my luck of the draw. I found out that the smooth-skinned green chilis are the mild ones, and the green chilis with wrinkled skin near the stem are spicy. Live and learn!

The next day we were scheduled to give public talks on our work in Canada and South Korea at the Goseong Public Library! Tune in next week to find out how our talks went!
Posted by Lisa Buckley at 4:43 PM