Tales from the Field: The Early Bird!

One of my favorite parts of paleontology is being able to visit historic locations: the place where the first of something was found, or the museum where a famous figure worked. One of my favorite memories of working on my Coelophysis project for my M.Sc. (now finally published as Bulletin 63 of the New Mexico Museum of Natural History!) was seeing the articulated nesting skeletons of Oviraptor at the American Museum of Natural History.

Type localities are a big deal in vertebrate paleontology. It's the location of first contact with a part of the Earth's history that has never before been seen and recognized for its importance. They are also the place where present and future researchers can visit and continue to collect information using new ideas and techniques. Also, these sites are bloody cool!

I had a great opportunity to visit the type locality of Ignotornis mcconnelli, the very first Mesozoic bird footprint ever named. Ignotornis was named by Maurice Goldsmith Mehl (1887-1966) in 1931 from a locality "one and a half miles northwest of Golden, Colorado". The specimen was found by N. H. McConnell and donated to the University of Colorado at Boulder. This specimen, the holotype specimen, is UCM 17614.

A holotype is the one physical example (it can be a picture, if there is no physical specimen) of an organism (or the trace of an organism) that is being given a unique name. The type is also the specimen to which other similar-looking specimens must be compared when you name a completely new specimen. There are many different categories of types, and many, many rules governing how the different types are named and under what circumstances. This is governed by the International Code of Zoological Nomenclature. For example: did the original physical specimen go missing and you want to make a different specimen the reference? There's a rule for that!

One of the great things with science is that there is always an opportunity to clear up confusing statements. When Mehl described Ignotornis, he made reference to other track-bearing slabs, but didn't really state how they were related to the type (although they were all originally cataloged under the same number), or make specific mention of which rock layer in the outcrop these slabs came from. Lockley et al. (2009) cleared up this bit of confusion and used these other track-bearing slabs to re-examine Ignotornis mcconnelli (and provided lots of great data and images), and formally name these other slabs as additional reference (type) specimens. Lockley et al. also narrowed down exactly how old Ignotoris is by tracking down (pun completely intended) the discovery site of the original specimen, which is in the Cretaceous Dakota Group, Albian - Cenomanian (approximately 113-94 million years old) in age.

Ignotornis mcconnelli was the first footprint type attributed to a bird by a long lead: Koreanaornis hamanensis was named in 1969, and the Peace Region's own Aquatilavipes swiboldae was named in 1981. The ichnogenus Ignotornis existed for 75 years with only one ichnospecies until 2006 when Ignotornis yangi was named (Kim et al. 2006), and in 2012 Kim et al. named Ignotornis gajinensis, which has a great feeding trace associated with the trackway (both from South Korea)

I visited the rediscovered type locality of Ignotornis mcconnelli in October in the company of Martin Lockley and Rich McCrea. It is not exactly the most obvious of localities: the mountain-building processes of the region have uplifted and shifted the rock layers around quite a bit, and I had a scary moment of having to climb up and over a vertical piece of sandstone and scramble down a steep slope to get to the locality. I don't like heights (which surprises many, given the amount of vertical track work I do), but that was not going to stop me from visiting this site.

Once I finished my scramble (and vocalizations reminiscent of a cat stuck up a tree), I was there: I was at the discovery site of the first Mesozoic bird footprints! The site did not disappoint.

See the hallux (otherwise known as digit I) impression? See the wide splay of the digits? These are classic bird footprint identifiers. When dealing with a trackmaker that is small, has a weight-bearing digit I, wide splay, and even impressed webbing, it's pretty easy to say "Yup, that's a bird!" It's when the trackmaker that is larger and with a digit I that does not always impress that people run into the "is it a large bird or a small non-avian theropod?" problem. I'm working hard to help address this issue - stay tuned for papers.

While we were there, we decided to document a large in-place (or in situ) set of Ignotornis trackways with photogrammetry. This way we get to take a 3D digital replica of the tracksite to our home lab with zero impact on the surface.

I also got to see how variable the preservation is with Ignotornis prints: not all that tweets leaves a hallux impression.

Bird traces are not the only ichnofossils to be found at this locality: invertebrate burrows, reptile prints, and large ornithopod footprints are preserved.

Of course, modern animals were present at the site. One rattlesnake got a bit cranky with us and rattled before scooting off under a rock, and a Red-tailed Hawk flew overhead. The lady beetle was much more willing to pose for photos. 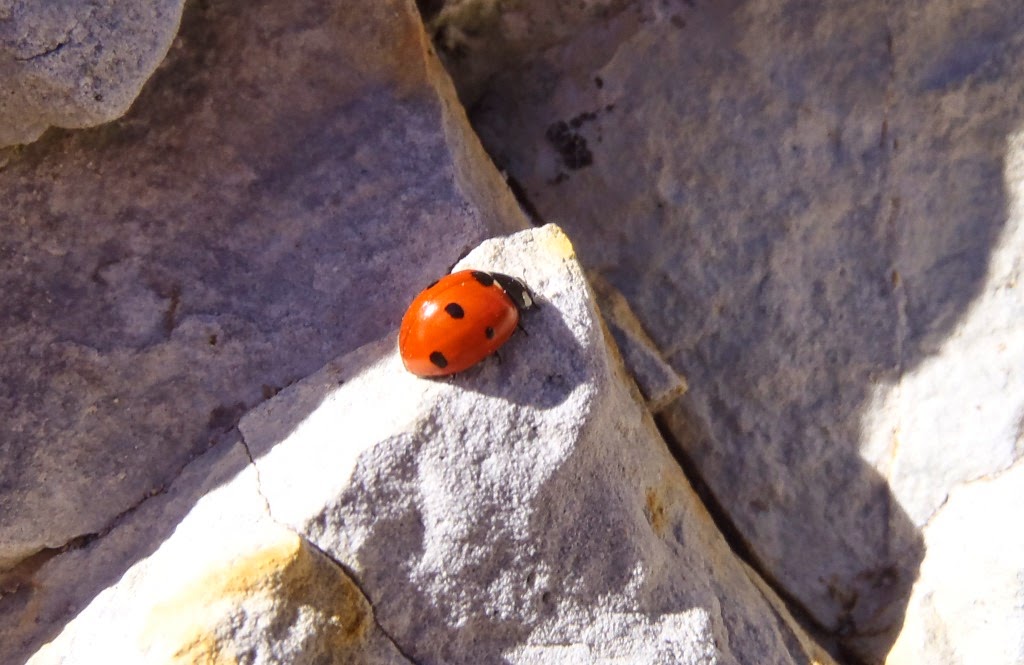 This ends my visit to the Ignotornis type locality! We collected a lot of great images and data, and I hope this will not be my only visit to the site. As the rock layers erode, more tracks will make their appearance after being hidden for 100 million years, waiting to tell us their story.