I had an interruption in my planned blogging schedule with a long trip out of my office that included a keynote presentation at the Association of Professional Engineers and Geoscientists of British Columbia in Whistler B.C. on October 21, a couple of family visits, and presenting at the Afternoon of Palaeontology conference at the Philip J. Currie Museum in Wembly, A.B. I was also the host for the Real Scientists Twitter account for the week of November 12 (or as it should be officially changed to...Dinovember). THEN I had paper revisions and paper proof revisions to submit for a new ichnospecies of Ignotornis and the first occurrence of Ignotornis in Canada! In the parlance of the Internet, I haz a busy.

Now that I am back at my desk until the end of December, I can dust off Ye Olde Blog and continue with the tale of our ichnological adventure to South Korea! I'll be breaking our adventures of September 13th into two posts. This day was a combination of laboratory-based and field-based investigation, so there is A LOT to cover.

We left our mighty palaeontologists at the Happy Owl Hotel in Jinju.
Note: there are two spellings for the city. Jinju is the official name of the city, while Chinju is the European-style phonetic spelling that isn't being used much nowadays, but several official signs and building names still carry that spelling.

After our fantastic barbeque dinner (there are several styles of Korean barbeque and all of them are delicious) we were in bed (after updating notes) around 1:30 am.

We started September 13th bright and early when Dr. Kim drove us to his lab at Chinju University. There we met his graduate students Su-jin (who drove us from Daejeon to Jinju), and [CHECK NOTES]. We were given an introduction to all of the specimens that were available for study and those that are currently under investigation. Of course, I focused on the bird tracks, but there were so many specimens present that demonstrate the hugely diverse Early Cretaceous paleofauna of South Korea.

There was a bird track slab on the second floor of the Earth Sciences Department that was collected from Jinju Innovation City (more on that later). It preserved at least three bird trackways, and looked as though the ground the birds were walking on was pretty goopy - the toes do not have crisp, clean outlines that show digital pads, but they do show other details that might be missing from a non-goopy sediment, such as deeply impressed toes and webbing impressions.

The slab is on display for all of the students to see in the main hallway.
This part amused me somewhat. See the small gravel used as a decorative bedding to camouflage the supporting foam base? This may have been an outdoor display at some point because a cat had come into contact with the display and left some, um, commentary on what it thought of fossil bird tracks.


This ranks a 1/10 in terms of animals interacting with fossil displays and fossil sites. The cat scat was easily removed with a plastic bag, and there were only two pieces. There was no smell of urine or evidence of fresh activity. If you want real horror stories of animals interacting with specimens, ask your local collections manager about moth or dermestid beetle infestations. Be kind to the poor souls and buy them a reviving beverage before requesting such a tale of misery and woe.

Step 1 of documenting a track slab such as this one was already done for me: all of the bird tracks on the slab were identified and had numbered stickers associated with them. All of the little white dots you see are number tags identifying a bird track. 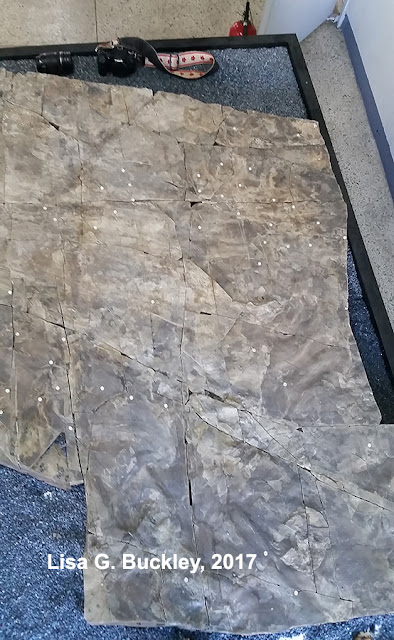 This made Step 2 less time-consuming (but necessary) step to complete: outline ALL of the footprints with either a chalk or a soapstone pencil. This outlining step is crucial. First, it makes you look at the individual tracks. I mean, it makes you REALLY look at the tracks. You start to notice features in individual footprints that you might not otherwise see if you are just focusing on the number of tracks in a trackway.

Take a look at these lovely bird tracks. 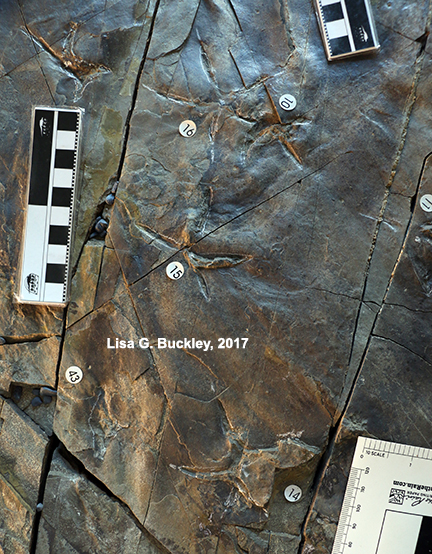 Tracks 14, 15, and 16 are were made by the same bird, and by the same individual. There is still some overlying sediment that is filling in some of the toe impressions. Although there is some sediment filling in the backward-pointing toe (the hallux), we can see that is has a noticeable outside curve that is consistent in all the tracks. That's cool, and I'll be focusing on what this means for the trackmaker.

Also, you can see that the step (also called the pace length in the literature) the bird took between track 14 and 15 is longer than the step between tracks 15 and 16. This is a really good example of something that frustrates people who don't really look at tracks: variation.

Think about you walking from, say, your desk to the coffee/teapot. Are all of your steps equal in length? Did one foot catch a bit on the uneven carpet? Did you pass someone and move slightly off of your path to make sure you didn't shoulder-check them into the wall? There is absolutely no way that the step you take between track 14 and 15 is going to be exactly the same length as the step you take between track 15 and 16. Why? Because you are not a robot. And neither are the dinosaurs and birds that made these tracks. They are dynamic, complex living organisms that will make countless little adjustments as they walk. This is why I think it is important to spend time watching animals move in their natural habitats if you are going to study tracks. As soon as we stop viewing tracks as having been made by living animals, we've lost the purpose of studying fossil tracks: to learn more about the lives of extinct animals using records of their recorded behavior. [Steps off of soapbox.]

I don't have too many pictures of the rest of the team, as they were all down in the main laboratory, either taking photogrammetry images of track slabs (Rich) or making latex peels and plastic tracings of track slabs (Martin.) Rich was also mentoring the graduate students on how to take photogrammetry images. Photogrammetry is like any other computer tool we use in paleontology: garbage data in = garbage results out. In this case, the data are the digital photographs. If the photos are rushed and blurry, or if the settings on the camera change greatly between one photo and the next, or if the overlap of the photos isn't enough (we aim for at least 60% overlap for all of the images), then sure, you'll get a digital model, but you probably won't be able to collect much data from it.

We broke for lunch around 12:30 pm and went to a really good Chinese restaurant. I tried a soup that I was told had sea cucumber in it. If no one had told me I would never have known it was sea cucumber: it had the same taste and texture as portabella mushroom.

Over lunch, we planned our afternoon adventure. We were heading to Bitu Island to see some of the track sites in the field, including a site that has a dromaeosaur (a.k.a. the raptors from Jurassic Park) trackway!

I was quite excited for our field adventure. All of the track sites we were going to see were on the shoreline, which - for my interests - means that there is a chance to see some modern shorebird tracks! I also enjoy shoreline prospecting: it is so different from the deep woods and mountain prospecting that we usually do in northeastern British Columbia.