Welcome back to Tracking Cretaceous Birds in Korea! Our first two days of our trip were spent in the city of Daejeon, home of the Natural Heritage Center!

Daejeon is a perfect example of a city that says "Science? Heck yeah: we LOVE SCIENCE, and we know you love it as well!" It is one of the few cities I have visited that does both a) a spectacular amount of research and heritage conservation, and b) is so proud of it that they talk about it on tourist brochures.
Editorial Note: Daejeon - and the entire experience of visiting Korea - shone the world's largest spotlight on how stingy North American culture and government is regarding respect and resources for heritage conservation and research. We had many long conversations with our Korean colleagues on this subject. Oh yes: researchers talk to one another quite extensively. We ALL know who has been naughty and who has been nice. What we were blown away by was the overall attitude that giving resources to heritage research and conservation is the right thing to do. It's considered good for the country, good for the general education and enlightenment of the population, and good for the world. In contrast, the North American mindset is "How will giving resources to heritage make me money and benefit me?" I think this is part of the colonialism mindset. We should be ashamed of ourselves, North America.
After meeting with staff of the Natural Heritage Center (a complex of several buildings and an interpretive center), we were taken to the collections building to see the dinosaur and bird tracks. Much like northeastern British Columbia, much of Korea's ichnology specimens occur on large rock slabs. Their collections facility is set up with this in mind:

The collections facility also has small cabinets for the smaller track specimens. I definitely appreciate the removable plexi-glass covers on all of the drawers. 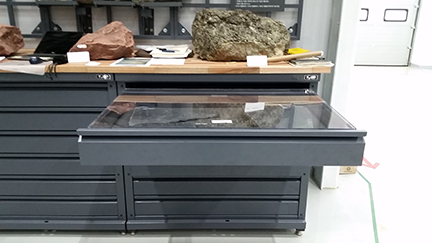 There are also several track specimens attached to heavy metal shelves on the walls. How do we access those? Well, fear not! Those counter tops are heavy duty (can take the weight of several specimens and an ichnologist or two), and there's a lift!

Of course, it's hot and humid in South Korea: we made a point to stay hydrated while working. We also had to counteract the humidity. Ichnologists are an ingenious bunch, so it did not take long to secure a hair dryer.
Our colleagues made sure that we took lunch breaks. Our first lunch in Daejeon was a version of bulgogi beef, spicy onion cakes, and a huge variety of side dishes.

Our hosts took care of the ordering.
Our second lunch in Daejeon was a great spicy soup and rice. There was always a spicy and a regular version of soups. Being a fan of spice, I always ordered the spicy version. With the exception of one green pepper, there was no dish that I encountered that was too spicy.

I have very few images of me in collections, as I was too busy documenting specimens. However, I have plenty of pictures of Early Cretaceous bird tracks! Here is a very small sample of everything that I saw:

Speaking of inconsistently preserved hallux (reversed toe) impressions, this is a great specimen that is going to be used to answer a couple of Cretaceous bird track questions I have.
I also investigated some of the large slabs for very shallow bird tracks. Small, shallow tracks are difficult to see even in good light. One little tool I've found useful are these mini-flashlights. Ever since our adventures without a flashlight documenting the tyrannosaur track site, we never leave home without some source of light.
The low-angle light highlighted these small, tridactyl bird tracks. 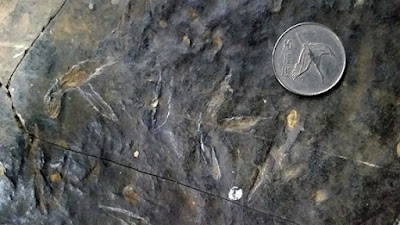 These tracks are very similar to an Early Cretaceous bird track type that we find in northeastern British Columbia. I have to do some more detailed comparative work to be sure, but I'm fairly excited about this!

After lunch on our second day in Daejeon, we took some time to check out the displays of the Natural Heritage Center.
Right outside of the entrance, is a nice little habitat for the Reeve's Turtle, an endangered species.
We actually saw some Reeve's Turtle! They must have decided not to wear their jaunty hats (as seen in the sign.) The entrance of the interpretive center has a large tree, and perched in it were several taxidermied birds. The picture is fairly dim: I don't use flash photography for displays that have textiles (feathers and fur included.)
The displays were very good: they never shy away from the scientific importance of historic places, ecosystems, and heritage sites. A great example was a display on proper etiquette for visiting caves.


Tracks featured prominently in the displays. Here are crane tracks to show visitors where to stand on an interactive display.
The taxidermy collection showcased several bird species. Of course, I focused my pictures on modern analogs to our Cretaceous shorebirds and wading birds.
Of course, with all of the owls that are in South Korea, I really had to take pictures of the owl displays.
There were track displays as well!
The dinosaur track displays we saw at the interpretive center are very similar to how we do our displays at the PRPRC: track-oriented. The dinosaurs that are presented are there to show what the trackmakers looked like. Skeletons, being rare in South Korea, are not the centerpiece of displays. Goseong is a very important track area: I'll write about our visit there as well!

After we visited the displays, we returned to the collections and worked until around 6:30pm. We were waiting for two graduate students, Su-jin and Peter, to pick us up and drive us to Jinju, our next research destination.

Our drive to Jinju was pleasant. I was absolutely not prepared for the surprise that awaited us when we arrived at what was going to be our home for the next three days:
I cannot begin to describe the excited noises I made when we pulled up to the Happy Owl Hotel.
Owls are my favorite dinosaurs. This is an owl-themed hotel. If I ever need to do a writing retreat for a future book, I'm staying at this hotel. Now you'll see a *very* small sample of all of the pictures I took. 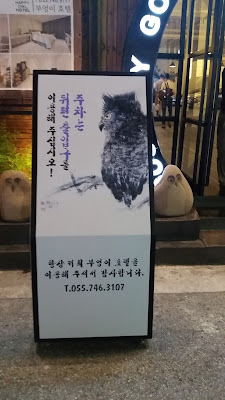 If you thought the outside was full of owls, wait until you see the inside! 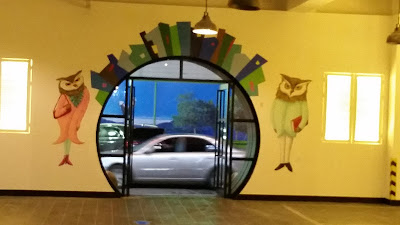 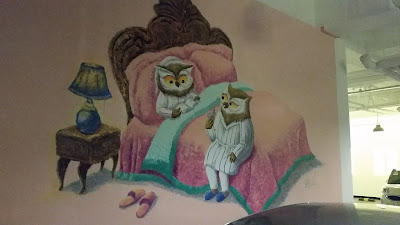 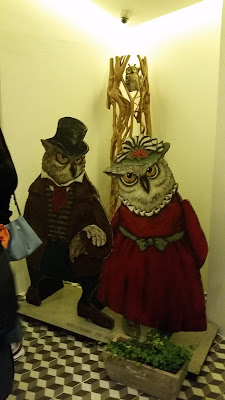 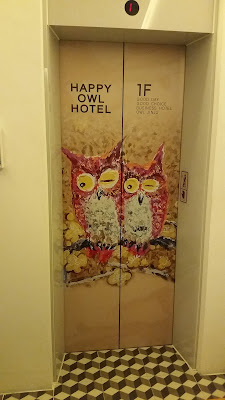 There were even more owls in the reception area! 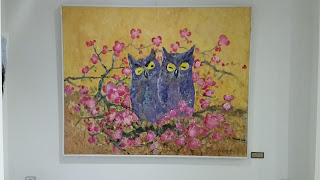 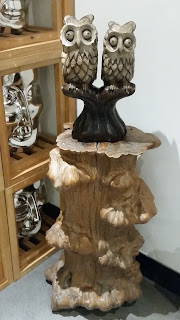 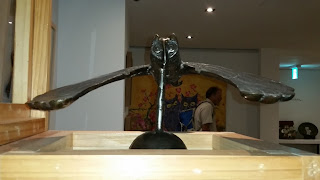 Try as I might, I don't think I photographed all of the owls on display in the Happy Owl Hotel...but I tried!

We crashed in to bed around 1:00am local time. It was a long day, and we knew we were in for a similarly long day tomorrow at Dr. Kyung-soo Kim's lab at Chinju University and targeted field sites.

Tune in next week for our adventures at Chinju University and our visits to field sites!
Posted by Lisa Buckley at 12:34 AM