Tracking the Wild in Your Neighborhood, Part 3: Of Mice and Birds

I have owls on the brain. My owl fascination (obsession?) is no secret. They are my favorite of the extant (living) theropods, followed hard on the hallux by diurnal raptors, vultures, and shorebirds.

Owls, traditionally known as harbingers of death and doom, are one of our Wild Neighbors: owls are often seen in city settings as long as there are trees. Parks, running trails, and cemeteries are great places to start looking for your Friendly Neighborhood Owl...

...OK, the friendly part is a lie. Don't let their adorable floofiness and their presence in your area fool you: owls are still wild animals. Mated pairs begin setting up their breeding territories in the early Spring, and owls take the word territory seriously. They will fiercely guard their territories. Also, while many owls are nocturnal (active at night), they still defend their territories during the day, much to the dismay of people who wander into those territories.

The most famous recent example is Owl Capone in Salem, Oregon: this Barred Owl was (and I'm going to guess we'll see Owl Capone again this year) was swooping silent but deadly onto joggers' heads and making off with their hats, leaving scratches in the process. There are now signs (made for the community courtesy of the Rachel Maddow Show) posted around Bush's Pasture Park, and they are all that is right with the world. 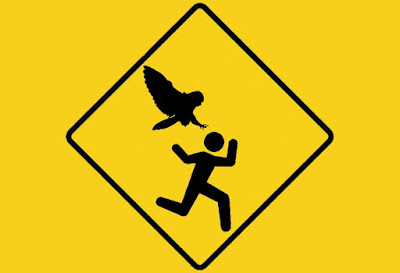 We may laugh at the idea of a hat-stealing owl, but keep in mind that having to constantly defend an area is stressful for owls. If you see an owl flying around your neighborhood in the early spring, keep a respectful distance. Don't hoot at them or chase them: this is the owl equivalent of a person running up to you and screaming "You want a piece of me?" in your face.

Also, keep your eyes on the ground! Owls are predators of rodents, birds, and insects. Owls are great at rodent control, and strike their rodent prey from above. Check out this BBC Earth video on filming a Barn Owl striking a target. It is simply amazing. My favorite part of the video is the shot from underneath.

Owls hunt rodents year round, which means that you could see owl hunting traces in your neighborhood! They can hear rodents tunneling away under the snow, and will strike the snow to catch their frosty feast.

I have yet to see any owl hunting traces in person. The Internet is full of them, as well as the landing traces of other birds. While I keep hunting for my own owl trace, I do have some other landing traces of birds that may* have been going after rodents.

* It can be difficult to determine the exact timing of events when you're looking at more than one trace. There are clues you can use. Do the edges of the footprints look the same? Did the animals sink in about the same depth? This means the sediment didn't change much between Animal 1 and Animal 2 making their marks, and is more likely they were made at the same time. If one trace looks freshly made, and the other one has melted or frosty edges, they were likely not made at the same time.

Hunting Trace 1: The Magpie and the Mouse.

I took this photo outside of the University of Alberta Earth and Atmospheric Sciences building February 2, 2009. 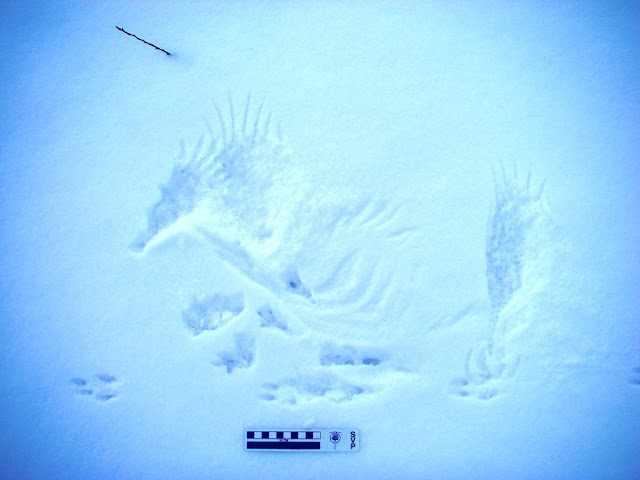 I don't know for sure that the Black-billed Magpie was making a serious effort to go after this small rodent, but there is a bit of a trackway kerfluffle near the first rodent hop on the right of the image - the magpie was trying to make contact. Black-billed Magpies are omnivorous, and have no problem digging into meat when it is available. One of the difficult parts of ichnology is determining motive. Did these two events - the rodent hopping and the magpie landing - even happen at the same time, or did minutes pass? If they happened at the same time, was the magpie seriously looking for a rodent snack or was it being mischievous, as corvids are known to be. Was it just playing with the rodent? I don't know. Part of thinking about the different scenarios is what makes ichnology fun!

Part 2: The Bird and the Bouncy Mouse. 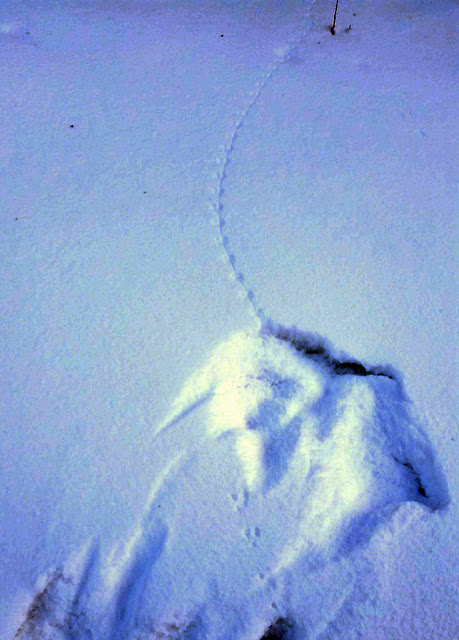 I played with the contrast a bit to highlight the small tracks of the small rodent (presumably a mouse). The mouse trackway and the crater had the same type of preservation. The mouse track didn't walk over the crater (no footprints in the crater). The crater, while poorly defined, also had some clues. There were no footprints (other than mine), like those of a dog or a fox, leading up to it or leading away from it. This crater appears out of thin air. There seems to be a sweeping motion captured on the left hand side of the crater, and a hint of two wings.

Even with the clues, this is not enough for me to say with 100% certainty that either of these are bird hunting traces. It's promising, but it's not good enough. Lucky for us owls, hawks, and corvids are living right alongside us, so we just have to be patient when looking for trackways recording their behavior.

Trackways, modern and fossil, capture brief snapshots of the lives of these animals in time and space. The majority of animal trackways record what the animals spent the bulk of their time doing: moving from Point A to Point B. Birds of prey and corvids do most of their moving in the air, so when they do make contact with the ground, chances are it's for a pretty interesting reason!

So, I will be continuing my quest for the elusive Owl Hunting Trace. Keep an eye on your neighborhood skies for your local predatory birds, and an ear ready to identify local owls: you might be treated to a sneak-peek into their stealthy lives!
Posted by Lisa Buckley at 10:55 AM