Tracking the Wild in Your Neighborhood, Part 2: Fine Feathered Friends

There's one type of trace that I'm guaranteed to see during the winter: raven landing traces. The Common Raven is, well, common in northeastern British Columbia, and is a year-long resident. This is our equivalent to the Rock Dove (or pigeon) in more densely populated areas, or the Black-billed Magpie for my Edmonton, Alberta readers. The ravens here are a clever bunch: they recognize that pickup trucks without canopies are choice opportunities to look for garbage bags, and they are adept at removing both latched and screw top garbage can lids. They also are not shy about landing in the snow.

This particular unkindness of ravens (which is an unfitting name for ravens, in my opinion) was quite happy to have discovered one such garbage can. 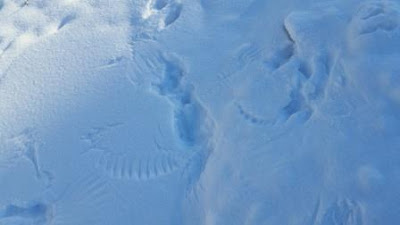 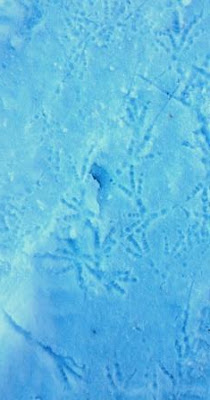 After landing, these ravens spent a great deal of time walking around their garbage treasure. Here we see the classic perching bird footprint shape in these footprints: a long backwards-facing digit (digit 1, or the hallux), the inner digit only lightly splayed away from the middle digit, and the outer digit largely splayed. This similar footprint shape is seen in many perching birds, from ravens to sparrows.

Another interesting feature in raven trackways is that they tend to drag their middle toes (digit III) when they walk. 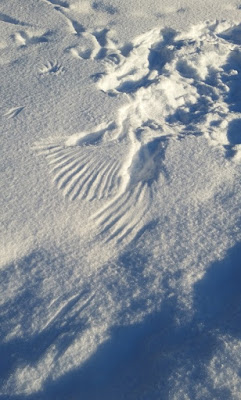 Landing traces of Black-billed Magpies tend to be a little bit smaller than those of the Common Raven. Magpie landing traces also come with a long tail drag, as seen above - directly related to their long tails!


The one trace for which I've been searching for over a decade is a predatory avian trace. This would be the impression left by a bird, such as an owl, hawk, or corvid, attempting to catch a small mammal. Our predatory birds are still active hunters in the areas in which they winter, so if you have a wooded area, park, or cemetery* nearby, check out the ground for landing strikes by hungry birds. I may have two such traces I can show you in my next post in the Tracking the Wild in Your Neighborhood series. Stay tuned!

*Yes, cemeteries. Cemeteries are quiet areas, often near or within wooded sections. Cemeteries can sometimes be the few remotely "wild" areas in a densely populated area. They also have the benefit of not being subject to the regular foot and vehicle traffic of a city. Cemeteries can be calm oases for urban wildlife.
Posted by Lisa Buckley at 12:48 PM