Despite my misadventures from the previous day, I was refreshed and eager to participate in the scheduled canyon hike. The canyon boasts of a lush green ecosystem within the fairly arid landscape of Turkmenistan. I was looking forward to all the birding opportunities I would have.

I was still a bit dehydrated, so I made sure to stock up on bottled water in my CamelPak, and to bring a bandanna to keep the sun off of the back of my neck. I also resolved to take it slow - one great part about birding is that no one expects you to keep up with the crowd when your face is glued to binoculars.

We pulled into the mouth of the canyon and dismounted. Right away we noticed a group of large, soaring birds circling far overhead. Our presence had disturbed a large colony of Griffon Vultures!
I should probably mention my undying adoration of vultures. I have been fascinated by these carrion eaters ever since I was a child. Growing up in southern BC I saw a great many Turkey Vultures in my rural community. One of my favorite hikes was to the offal dump in the mountains behind the local farm. If I was very quiet, I could sneak up on the Turkey Vultures feasting on the remains of the most recent slaughter. Their appearance is what initially attracted me, but as I learned more about them, the deeper my fascination grew. I tried in vain to convince the adults in my life (it was a small circle, but I tried) that vultures are beautiful birds that deserve respect. Sadly, vultures in Asia are on a frightening decline towards extinction, but thanks to the efforts of organizations such as the RSPB, there is a plan in place to reverse this trend.

I digress. We began our hike up the canyon. Even if I was separated from the group, there was no way I could have become lost: a pipe carrying fresh water ran along the entire length of our trail. It was also leaking in many places (I was told that local people punch holes in the pipe to access the water) so there was also no way I would die of thirst. 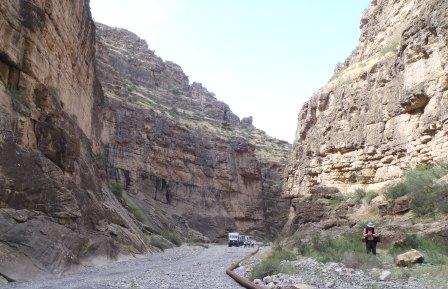 It was an extremely hot day. I paused frequently to look at the scenery, and noticed that the Griffon Vultures were still following us after almost a kilometer. One of the UNESCO committee members was hiking with me and Rich, and she and I took an opportunity to use one of the puncture holes in the water pipe to soak our bandannas. As we were bending down, I hear Rich scrambling to get the video camera out. I looked up to see what all the fuss was, and saw the most amazing sight: a Griffon Vulture, on seeing us bend down, had descended into the canyon to investigate the situation. We were being selected by the vultures as one selects a lobster from a tank.

If only I had been carrying any form of food that a vulture would have found palatable, I would have stayed crouched to see if it would have landed: I wouldn't want a vulture to go to all the trouble of landing if it was not going to get a good meal out of it. After we stood up (and made quite a few Monty Python jokes about not being dead yet), our opportunistic Griffon Vulture made a couple more passes and ascended out of the canyon.

This was the highlight of the canyon trip for me. The flora in the cool confines of the canyon was lovely, but my interest in botany was waning with my energy. My body was telling me to give it a rest. I sat out the rest of the hike at one of the many tables set out for our catered lunch. Complete with circling vultures. 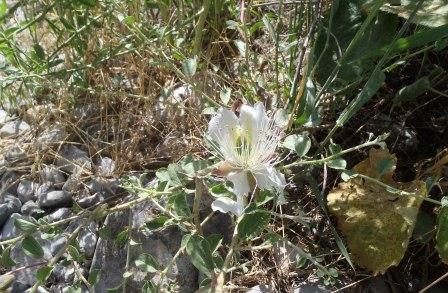 The next day (May 27th) we traveled back via train to Turkmenabat to attend the international conference. I was looking forward to this with some trepidation: no one on the Expedition had any idea what the schedule was for the talks, or how long each speaker had for their talk. We knew there were the plenary speakers (Rich, Federico, and Martin were among those), and regular speakers (my category). We figured that we would get the information when we needed it.

May 28th was the first day of the conference, and the rest of the international and national attendees had arrived in Turkmenabat.
Our entourage had swelled to three buses for the conference attendees and several police and security vehicles for escort. We did not stop for one red light the entire time the conference was running. One person counted at least 50 officers stopping traffic We were shuttled from our hotel to one of the national theaters for Day 1 of the Conference.


After the welcome ceremony we were escorted to the main theater. The Expedition Members were ushered into the first two rows. Rich went with me to the front row, but I had noticed something he had not: he was not going to be sitting in the front row. I pointed to the stage, and pointed at his name placard on the stage. He was going to be part of this morning's show.

The plenary speakers found out that morning they had 20 minutes to give their presentations, and that had to include translation time. Rich gives very slide-rich presentations: a 30 minute presentation might contain anywhere from 60 - 100 slides. He also has an organic presentation style that often includes many jokes. I do not know how he did it, but he managed to give a great presentation of 60 slides in 17 minutes including translation. I would later that day have cause to perform a similar feat, but at that time I was naively sitting in the front row enjoying the show.

After the plenary session concluded it was time for lunch. We were shuttled to the Hippodrome for a huge banquet lunch.
A very touching event happened to me after lunch. When we entered the banquet hall we were greeted by a long line of holy men, whose hands we shook as we passed. These same holy men were also waiting in the line as we left the hall. A few of us felt that it would be very polite if we shook their hands again and say thanks. As I made my way down the line I saw there was a group of elderly ladies in traditional costume waiting at the end. When I reached the end of the line I was instantly surrounded by the ladies, and they all wanted to hug and kiss me. It was very sweet. Their affection reminded me of my Granny, who had past away only two years ago.

By this time the rest of us speakers had figured out when we were to present. I had a major problem: my jump drive containing my presentation was back at the hotel. Another presenter had a similar presentation conundrum: there were images he wanted to add to his presentation. I also wanted to add a few more images. We agreed to be a united front in needing to return to the hotel. We flagged down Dr. Poladov and asked if we could get a ride to the hotel and from the hotel to the theater. We were, and we quickly put the last minute tweaks on our presentations and made it back to the theater with time to spare. I was feeling quite proud of myself for being able to improve my talk on such short notice. That feeling was not going to last.

I get to my session, sit down, and Rich whispers to me "Five minutes."

"No," said Rich, "that's how long you have to give your presentation. Including translation." He smiled that smile that said "Now it's your turn."

Five minutes. Oh crap. Where are the Griffon Vultures when you need them?

I had prepared my presentation (challenges in preserving and protecting large intact track surfaces) using the typical international conference formatting: a presentation with images and data that can be delivered in 12 minutes with a couple of minutes for questions. I had (after my sneaky editing session) a grand total of 17 slides.

I sat there with a stunned look on my face. I watched the presenters from Turkmenistan give their talks. Their presentation style was to deliver a monologue with little to no images and sparse (from what I could tell) supporting data.

I am a nervous public speaker. I have given numerous public presentations, several professional talks, and have taught multiple labs, but before every presentation a knot of anxiety tightens in my chest and stomach. I have been presenting for more than a decade, and I think this is a reaction to public speaking that I will always have. This time felt completely different. A surreal calm washed over me. It was a different feeling than not caring, but I felt as though a lot of pressure had been relieved. This was the most relaxed I had ever been for a presentation. I think it was because I knew I had no time whatsoever to say anything ridiculous or make any mistakes. I had to keep my blather on a leash. I even threw in a joke that translated well. At the break I received a lot of compliments on my talk.

I won't go into the 20 minute long closing ceremony speech to the President about the conference and about all the wonderful successes for which the President can take credit (this was the style of official meetings in Turkmenistan: the President receives long and detailed praise for all accomplishments).


That concludes the memorable (for me) parts of my trip to Turkmenistan.
This trip was definitely a cultural experience. Will I ever go back to Turkmenistan for more paleontology related work? I can honestly say I do not know. Dr. Poladov, the Turkmenistan researcher who succeeded in the monumental task of organizing, coordinating, and executing the Expedition and Conference, has not responded to my emails, nor has he responded to the emails of the other paleontologists who I know have tried to contact him. I wish Dr. Poladov all the best: he did a fantastic job coordinating such an event and should be commended. Maybe we will hear from him someday soon.

Strange Woman out.
Posted by Lisa Buckley at 12:42 AM