Hello, Dear Readers! I am back from field work and a conference in China, about which I will post as soon as I wrap up Tales from Turkmenistan. I had difficulty accessing the blog while abroad, so I had to wait until now to continue this tale.

Where did I leave off? Oh, yes! We were leaving the Koytendag track site, had finished lunch, boarded the Paintmixer, and were on our way to Umbar Canyon Waterfall. This is where the bloom falls off the rose of the glamorous life of a paleontologist and the harsh reality sets in - as great as this profession is, it does not offer a +5 immunity to travelers' ailments.

The Paintmixer and the entourage of vehicles pulled into parking area for the hike into the Umbar Canyon. "Great," I thought, "all I have to do is wait for the crew to hike up the Canyon, and I'll have the parking area and all those lovely bushes to myself!" I saw a goat trail leading up the hill next to the parking lot - that was my trail.

"Oh, you silly naive Strange Woman", my Practical Brain thought. "You forgot about the rest of the entourage! The wait at the vehicles, don't they? They keep an eye on everyone!"

I started to climb the goat trail. I was unwilling to crouch behind rocks because of the scorpions and snakes in the area (I could imagine that death scene: Rich finding me, with my pants unceremoniously gathered around my ankles, keeled over from a scorpion sting on my derriere, and the end of toilet paper flapping in the light breeze like a somber flag of surrender. That would make for, no pun intended, a crappy eulogy.)

With Herculean control I hiked up the trail, found a bush, turned around to make sure the coast is clear...monkey puzzle tree! There I was in plain site of the entire entourage!

I made it. I turned around...you're kidding?!? Was there no bush on this accursed hill that was out of sight of the huge mass of people below?!? This had turned into one of those strange Dali-esque dreams where you wander through a hallway or a large room looking for something important and everything is out of perspective and you can see around corners. No? Just me?

I barely made it. When I say I barely made it, I mean just barely. Nature was not going to let this call go to voicemail, entourage or no. At this point all I could think was "let them film me and broadcast it over Turkmenistan TV for all I care. Heck, I'll do the voice-over." If anyone did see me in my oh-so-undignified-for-an-international-researcher situation, they paid me no mind. I would have waved had anyone noticed me.

I descend the hill feeling like the bowels had dropped out of my soul. I was so weak and shaky I could barely walk, but I slowly regained my composure as I rejoined Rich. It was a good thing, too, because our hosts saw that I hadn't been to the Waterfall and they were hell-bent on making sure I saw it. I admit, it was a nice waterfall. [No pictures here.]

We make it back to the Paintmixer for our final stop of the day: the captive breeding program for native animals!

There were also members of the native fauna that were well past the cute and alive stage. 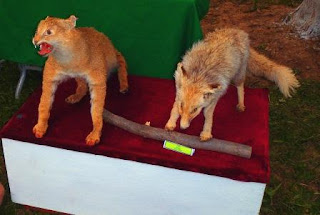 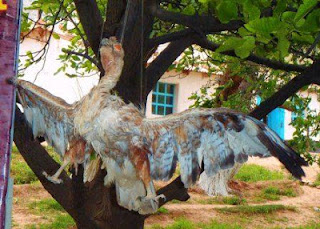 This annoyed me. I usually have a strong digestive constitution. The only digestive issue I've ever had is with meat, and even that is not consistent. I was used to those symptoms, and this was not it. I had been struck low by a traveler's bug. Now I hoped that my supply of Pepto-Bismal would last. When we made it back to camp, I skipped dinner, slunk to our room, gulped water and the Pepto, and hoped the situation would resolve itself by morning.

The situation resolved itself, alright. It resolved to be worse than the previous day.

On the 26th we were scheduled to visit an underground mine to explore cave fauna and karst (cave) features. This involved a long voyage on the Paintmixer, and a kilometer trek underground. As soon as I awoke I knew the only trek I would be making today (with some regularity, again, no pun intended) would be to the bathroom and back. I crawled to breakfast to stock up on bread, fruit and water, and then hid in my room like a fugitive. As soon as people left, I stole to the bathroom and relieved both the mens' and ladies' toilets of all their toilet paper. This was war, dammit! So there I was, curled in the fetal position on my bed, surrounded by my hoard of tissue like some deranged irregular squirrel. That was 9:00am.

By 1:00pm I was out of tissue. The Pepto did not have the muscle to stop what my system was throwing down. So much for planning ahead. I was able to mime to the poor cleaning lady that I was in desperate need of tissue by waving an empty roll and looking frantic. One of the center attendants tried to get me to go to lunch, but at that point all lunch would have done is added fuel to a fire I wanted dead. I tried to mime that I was not feeling well without making it look like I didn't like the food. (The things I worry about when I'm sick. This must be the Canadian in me.) I think my miming had an effect, because somehow the poor fellow was able to convey that, as soon as the crew returned, he would send the crew doctor in to look at me.

There was one issue...the doctor only spoke Turkmen and Russian.

So, who out there has ever had to pantomime diarrhea? To a crowd of strangers? My acting skills must be superb (or desperation is my muse), for between my pantomime of my Old Faithful intestines and a supplemented translation of other symptoms by one of the Russian geologists, I was given the medication I needed and instructed to stay away from sweets, alcohol, and overly fatty foods while recovering.

I was going to live!!! The medication worked fast. I was able to go to dinner and attend that evening's entertainment of traditional dancing and singing. We were all sitting on either the huge traditional couches that surrounded the carpeted dance area, or sitting at the farther tables. I was on one of the couches. Once the traditional performances were over, modern club music started playing and all the dancers started pulling the expedition members off of the couches and on to the dance floor. I couldn't escape.

I am not even a passable dancer on the best of days. My motto is "if you can't dance well, dance silly." My favorite moves are the Bus Driver and the Shopping Cart. Other than those, I know one move. The living dead have more rhythm than I do. Regardless, out I went and did my best not to embarrass anyone. I think people were just happy I went out, because a lot of the dancers grabbed me for cellphone photos.

That's it for now! Next post: the Canyon hike and the Conference. Strange Woman out.
Posted by Lisa Buckley at 10:58 AM