When we last left our heroes, they were finishing up a long day (September 13) of laboratory and field work in Chinju (Jinju) University and Bito Island, respectively. September 14 would also prove to be an exciting field- and museum- day, full of bird tracks! Don't worry: I won't forget the non-avian dinosaur and pterosaur tracks!

Once again I'm forced to break our day into the field component and the museum component because there is just so much to talk about. This week's September 14 post will cover our field activities, and the next post will cover the spectacular Gajin Track Site.

We start off our day with a 7:30am wake-up and met Sujin for breakfast at a local Starbucks around 8:30am. After breakfast, we met Dr. Kim Kyung-soo at the hotel and drove to one of the in-progress construction sites of Jinju Innovation City. Remember in my last post, when I said that one of the similarities between studying tracks in British Columbia and South Korea is that many discoveries were (and continue to be) made as a result of industrial activity? Jinju Innovation City is a perfect example of industry significantly contributing to paleontology discoveries.

Excavations are uncovering track surface after track surface, and with a mandate to preserve national heritage, paleontologists in South Korea have to not only archive these large track-bearing blocks, but they also have to collect them! In the spirit of "necessity is the mother of invention," Dr. Kim designed a novel method for removing and transporting track blocks weighing several hundred kilograms...in one piece. Oh yes: and every picture in which you see a "KS" label on a track specimen? That specimen was collected and documented by Dr. Kim Kyung-soo.
When we have the resources, we are going to bring Dr. Kim and his team over to visit track sites in British Columbia: I would love to see his track slab cradle technique in action!

Not all of the track-bearing surfaces are removed. One of the great approaches we witnessed in South Korea (take note, North America) is that people recognize - and act on - the value of preserving track localities as interpretive sites to educate the public. At this one construction site, two interpretive buildings are under construction for small interpretive centers. 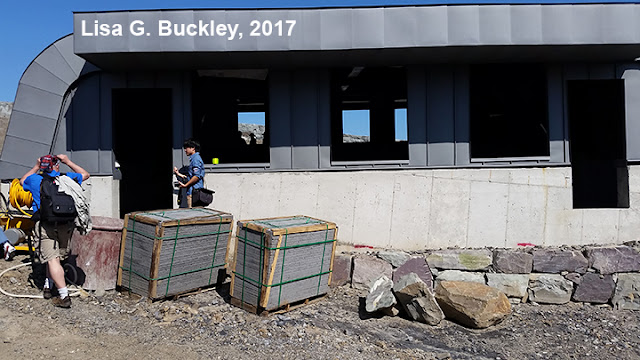 I am just going to add an editorial note: this is the Republic of Korea. The country has a population of in a land area of 51,446,201 (with a density of 507 people per square kilometer) in a 100,210 square kilometers. Land, and space on which to develop, is valuable, and yet the Republic of Korea STILL finds ways to preserve and showcase their fossil heritage with respect. Now look to Canada. We have a population of 35,151,728 people spread over 9,984,670 square kilometers (population density of 3.92 people per square kilometer, albeit concentrated near the border with the United States.) So how come there is so much reticence towards protective buildings such as this one installed over important fossil sites? Take your time.

The track surface is covered to protect it during construction, so we pulled back the layers of tarps and thick felt-like cushioning to visit the surface.
We swept off portions of the track site to reveal some tracks with exquisite detail. The track type that has fascinated me (let's be honest: they all fascinate me) are trackways of pterosaurs. Yup: tracks of flying reptiles! When they weren't soaring through the air, pterosaurs walked on surfaces as quadrupeds, leaving wing finger impressions! HOW COOL IS THAT?!?
Editorial Note: You may want to Google pterosaurs. I don't blame you: they are fascinating archosaurs! However, you may encounter two websites in your search. One is called "ReptileEvolution.com" and the other is called "Pterosaur Heresies," both of which are run by the same person. Both of these sites are full of interesting artwork, but the information they provide on "radical" new ideas about pterosaurs is not supported by information from the fossils. Neither site should be a go-to site for accurate, data-supported information. Read the Tetrapod Zoology blog post on the issue.

One part of Dr. Richard McCrea's work is to refine photogrammetry techniques, particularly with small, low-relief tracks. This little pterosaur handprint is a perfect test subject!
With a surface that preserved detail like pterosaur tracks, I was very hopeful for bird tracks. I was not disappointed! We didn't have a lot of time at the site, so this is the only definite track I could see, but where there's one, there's likely more!
We drove to Sangcheong-gun (Sangcheong County) to check out a track site that was relatively close to the highway. It was a HOT day: the track surface was almost burning hot. It was a great contrast to the raindrop impressions we saw.
This was a lovely track surface for fine details. The bird tracks were exquisite. The bird track in the center of the image above has slight digital pads and a lovely hint of a webbing impression!
There's a lot we can tell about this trackmaker by looking at its footprint. One, this is a small bird (footprint length about 2.5 cm). Two, it doesn't have a well-impressed hallux (or reversed toe), so we know it didn't look or behave like a small crane or egret. Three, this bird only has a little bit of webbing between the middle and outer digit: this isn't a webbed bird like a duck. Four, this bird meandered, stopped, and started again, all over the track surface. This bird, if we were to take a time machine back to the Early Cretaceous, would have looked and behaved a lot like one of our present-day sandpipers. This was another track site exposed by industrial activity (construction of a highway), although our time machine shows us a peaceful scene of a very quiet, silty bank next to a small lake or slow-moving stream.

Also, we would have had to watch out for being stepped on by sauropods! Another thing we know from the tracks is that the sauropod came through first, and then the birds walked on the surface. We know this because the bird trackway actually walks around the sauropod track! How cool is that? 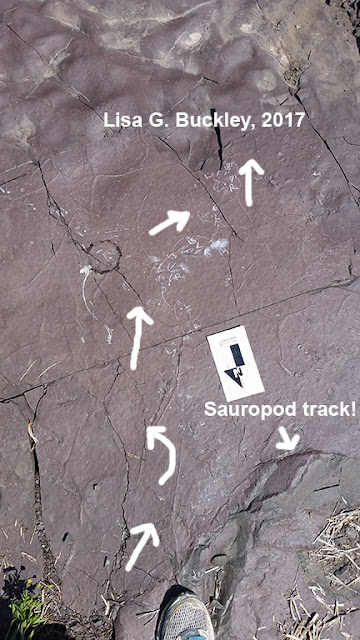 We then drove to a small cafe where we would eat what would be my favorite meal in Korea: naengmyeon, cold noodle soup! (Note: this is only one of many recipes I found online.) Most of the soups we tried in Korea had two versions, a regular version and a spicy version (I went spicy!) This is now a soup I make regularly for dinner, or at least the closest version I can make living in a remote area with limited shopping options.

Stay tuned for our visit to the Gajin-ri track!
Posted by Lisa Buckley at 12:36 PM