Yes, August caught up with us. We've been as busy as a $0.00 field work budget season can allow us to be: this means no multi-week or multi-day expeditions to work on our many large-scale projects. I outlined a small list large projects we should be doing this summer in my last blog post. Spoilers: like all work of value, working to protect, preserve, and interpret fossil heritage has a price tag. Anyone who thinks you can do field work for free is lying to themselves and others.

We have a great member of our field crew, Dr. Charles Helm. To say that he is a passionate and avid outdoors person is an understatement. To say that he is one of our most dedicated and passionate volunteer is an understatement. Medical doctor by training, Charles has authored books, been an author on some of our scientific papers, and is now first-authoring his own papers on an ichnology site he has been surveying for years (stay tuned!)

We have a list of "Helm Sites" that we check out every field season. On August 01, after checking out a report of ankylosaur tracks from Conuma Coal's Wolverine Mine, we visited three other sites to confirm fossil tracks that Charles found and, of course, to look for more!

This expedition fell on a Tuesday, which is the day of the week I run #NameThatTrack on Twitter, the fun ichnology game!

All of that changed on August 1. Charles and Rich were checking out different parts of the outcrop, and I looked at what I obsessively look at: really fine-grained bedding surfaces of rock. My lack of personal Cretaceous bird track discoveries was not for lack of trying, my friends. I posted tweets of tracks we were coming across.

Lighting is EVERYTHING for tracks, and even more so for small tracks. Dim overcast light, or super bright straight-on light, will wash out shadows that highlight subtle surface relief. The lighting was not exactly on my side that day...but I finally got to post this tweet:


Based on the geology of the area, these tracks are Early Cretaceous in age (about 100 million years old), and are similar in age to bird tracks that we research in Alberta, the United States, and China. Here's a close-up of one of the tracks!
Our only problem with the specimen was this: 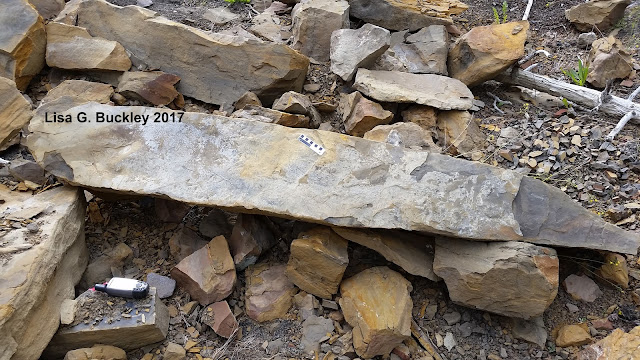 At over two meters long and half a meter thick, this slab of rock must have weighed close to 400 kg (Note: at the time, we thought the whole slab was only 300 kg. Oh, were we wrong. So wrong.) There was no way Charles, Rich, and I could move it in its current state. But we needed to collect this specimen.

Fast forward to August 5. We were scheduled to be interviewed for a news broadcast on the work our Research Centre has been doing in the region since 2003. Rich asked the reporter, Kraig Krause, if he would be interested in including the recovery of the bird tracks in his segment. He was definitely on board, so we planned a morning tour of the research centre and then off to collect the bird track slab!

We arrived at the site around 12:30 pm. It was starting out to be a hot day, with no cloud cover in sight.

Step 1: Build a temporary bridge over the ditch. This part was simple. We weren't worried about the steep part leading down to the bridge: after all, there were four of us, and the slab would be much lighter. What could possibly go wrong?
(Note: I can feel every field person cringe at that statement. You never, ever ask that on an expedition.)
Step 2: Trim the track slab. We needed to remove at least half of the track slab thickness to make it portable. Here's the specimen before the trimming. 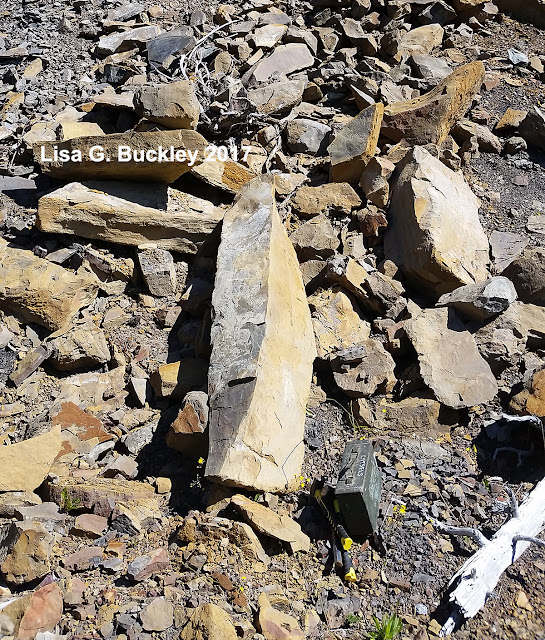 Removing some of the thickness from the slab was easy: there was already a fracture in the rock that we could exploit, and the bottom half of the slab separated with three chisels and maybe half a dozen hits with the crack hammer.
The next step was to remove the eroded (no track surface) part of the rock at the bottom of the picture. Rich and I took turns: one would drill holes along the bottom edge of the track surface while the other watched the track surface. Rotary hammers cause vibrations that could shake loose bits of track surface.
Of course, when you're in the middle of doing a delicate job such as track slab trimming, you hope there isn't going to be a big "Oops!" that ends up on camera. Thankfully the trimming went smoothly, and the non-track part of the slab came off easily.
Step 3: Haul the specimen.
This was the Hard Part: hoisting the slab on to the wheelbarrow. First we wrapped it with a heavy tow strap to give ourselves more hand holds for potentially hand-hauling the block over the ditch bridge. Then we muscled the specimen on to one of the 2" by 8" boards so that the specimen would sit evenly across the wheelbarrow. Then...HEAVE! That specimen was heavier than we anticipated: it had to be close to 225 kg.
Then Rich noticed an issue with the wheelbarrow: the cotter pin that keeps the wheel from slipping off of the axle was missing for the left wheel. The last thing we wanted to have happen was the wheel fall off while we were moving 250 kg of solid rock. Before we continued, Rich improvised an ersatz cotter pin out of a small awl. 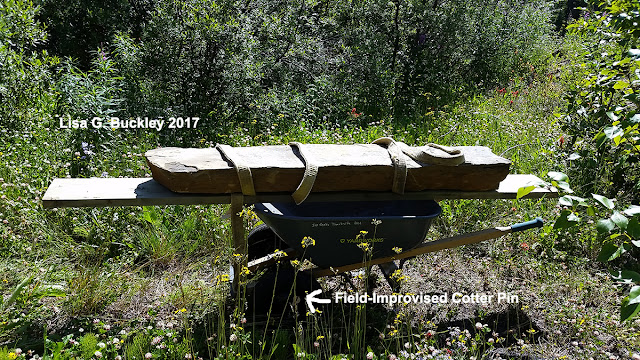 Walking the track slab down to the bridge was a group effort: we made sure that the slab wasn't going to bounce or slide off as the wheelbarrow jostled over uneven terrain. Then we approached the ditch.

Because of how steep the bank of the ditch was, we had to slide the track slab off of the wheelbarrow to get it on to the bridge. We stood around the slab, not really relishing the thought of pushing it across the bridge and then putting it back on the wheelbarrow, when the thought hit us: we have a field truck and a tow strap.

New Plan: pull the track slab the rest of the way across the bridge and up the ditch slope on to the road, and then lift the slab into the back of the truck.

Whew. The whole operation was finished by 2:30 pm.

Now that the track slab is back at the Research Centre, we get to do the fun part: examining the surface! This will involve turning off all of the overhead lights and shining a low angle light across the surface to create shadows from the small-scale surface details. This really makes small tracks POP. We'll also use the same technique at the field site: we're planning an overnight at the outcrop where we can examine all of the potential track surfaces with a flashlight in the evening. Once we do the low angle light examination, we'll have a better idea of what type of bird tracks these are.