Hello, Dear Readers! It's about time that I resume my tale of my first paleontological trip to China for the Chongqing Ichnology Conference. We've been extremely busy since our helicopter trip into northern BC: we've been prospecting exposures of Late Jurassic-Early Cretaceous rock in creek beds, and we've also been preoccupied with the recent helicopter lift of our hadrosaur skeleton (a complete success.) We have a bit of down time before our return trip to China (which is good, as I seem to have caught the flu that is making its rounds around town), so now I can turn my attentions to sorting photos.

We are now at the morning of November 21st. The original plan was for us to visit the part of the Great Wall that was in driving distance to Beijing, but it snowed the night before so the roads were not considered passable. Instead, we went to the airport early. Almost eight hours early. The drive to the airport was very interesting. Actually, driving in China interesting, period. People on motorbikes dance in between vehicles going highway speeds with intricate choreography. I admit I was convinced our 15-passenger van was going to run over a biker on more than one occasion due to the traffic density and speed.

We made it to the airport without incident. What were we going to do for almost eight hours? We had nothing to worry about: Lida booked for us a private room in one of the airport restaurants where we could relax in absolute comfort. What was our version of relaxing? Each and every one of us (me, Rich, Martin, Hendrik, Julien, Daniel, and Lida) were either writing papers, working on paper reviews, or putting the finishing touches on our presentations for the conference. One catch for renting the room was that a certain amount had to be spent on food and drink. That was no problem for us: science is hungry and thirsty work, and we were there for two meals. We were also there for several playings of the looped background music: some techno club cacophony with the repetitive lyrics of "Are you ready to make some noise? Make some noise? Make some noise?"

Forgive me, Dear Readers, but there was no way I was going to put any effort into finding either the original or the longer playing version. Suffice to say I will NEVER get those lyrics out of my head. This is what I get for not having my audiobooks handy. We arrived in Linshu the evening of September 21, and were shuttled to our hotel.

We spent two days at the Linshu tracksites. Early Cretaceous in age, they boast an ichnofauna attributed to sauropods, ankylosaurs, stegosaurs, and small, medium, and large theropods. Our first stop was in a stone quarry on the outskirts of the populated areas. Once again we were greeted by our old friend the vertical track surface.

Free-climbing a vertical track face is not an option is one wants to collect useful data. Martin Lockley (left) was doing his best impression of a mountain goat to check out a contact between two rock layers when he and I were logging the stratigraphic section for the site.

Ichno-Geek Note: A stratigraphic section is the layers of rock that are deposited one on top of the other. These sections are diagrammed to show which rock layers came first, the grain size of the rock (fine or coarse), if there are any sediment deposition structures such as ripples or scour surfaces, and what the rocks contain (burrows, tracks, bones, wood, leaves, invertebrates, etc.) You cannot develop an accurate picture of the paleoenvironment in which these track-making animals lived without knowing under what conditions the track-bearing layers were deposited.

Once again we had access to ladders, but for documenting the large track surface featured above, we had something a bit more high-tech: we had a picker truck!

While Daniel Marty and Hendrik Klein, did the primary documentation on the track face, and after Martin and I did the stratigraphic section, Rich and I decided to check out the rest of the bedding surfaces for additional tracks. I may have mentioned this before, but one of the great parts of vertical track faces is that multiple bedding surfaces can be exposed. It is not uncommon for one track surface to slough off only to reveal a completely new track surface underneath. I was still on the hunt for small tracks: invertebrates, birds, small reptiles, etc., and although I saw many finely rippled surfaces, rain drop casts, and many paired U-shaped burrows, bird tracks continued to evade me.

We were not completely skunked in our search for the small dinosaur ichnofauna: Rich came across one manus-pes set of a small quadrupedal herbivorous dinosaur. We exposed the rest of the surface in hopes of revealing a trackway, but only the one manus-pes set was preserved in any convincing detail.

Meanwhile, work was continuing on tracing the multiple trackways of a large quadrupedal track maker (the paper was submitted in May 2013 - stay tuned!)

Martin Lockley had also been checking out additional bedding surfaces for tracks, and made a fantastic find: didactyl (two-toed) theropod tracks!

We also found out there was a documentary being filmed about the discovery and research of the tracksites in the Linshu area. We were all interviewed, and asked to compare the tracks at this site to other track sites we had individually worked on around the world. These tracks are comparable in age to the Earliest Cretaceous track sites in western Canada, but they have a slightly different ichnofauna...at least it appears as such at this point in our research. This is one of the issues we are working on solving, thanks to recent (as in just this month!) discoveries of Late Jurassic-Early Cretaceous tracks in the Peace Region.

As an aside, I think I was asked one question that the other members of the field team were not. Once the scientific questions were done, the interviewer asked "Do you mind if I ask you a personal question?" I said that a personal question was fine. I had a feeling the question was related to my gender: at this point in the expedition I was the only woman on the field team. The interviewer asked "How will having a family impact your career as a scientist and field paleontologist?"

Technically still of child-bearing age, I had given a lot of thought to this particular question. There is no doubt that having a child would drastically change the level of field work that I currently enjoy. I would be a fool to believe otherwise. That being said, I know of a few mothers who began bringing their offspring to field sites as soon as the babies could support their own heads, so it is not impossible to balance both a field career and raising a child. It also helps to have a husband who is a working team member.

It is a good thing that I had actually given the topic some thought, otherwise I might have gasped and gaped with all the grace of a beached fish. The best answer I could give was this: if we do decide to have kids, Rich and I will work as a team to make sure that both careers continue successfully, and that our kid would grow up thinking that going into the field looking for dinosaurs with Mom and Dad would be a normal part of the summer. The documentary people seemed both pleased and interested by this answer.

The acetate tracing was completed, and with help of the picker truck removed without incident.
We had a lot of interest from locals. We could not tempt these kids to come out of hiding.
We were introduced to the man, a local farmer whose name I was not told, who first noticed the tracks on the exposed rock in the area.
It is not just the quarry that has track surfaces: several outcrops in the surrounding farmlands were rich with dinosaur prints!
That was a full Day One in the Linshu region.

Day Two began with a visit to a different quarry. We first investigated a natural mold trackway of a small tetradactyl (four-digit) track maker.

I took a stroll around this slab to the back surface to see if there were any natural casts (infills) preserved from a lower track surface. I was not disappointed!
Once some of the surrounding sediment was cleared away, the prints became more visible. I noticed that our group seemed smaller. Where did they go? They (Daniel Marty, Rich McCrea, Martin Lockley, Lida Xing) were checking out yet another track-bearing surface that preserved a trackway of a sauropod.
In terms of field safety (besides the scrambling around vertical surfaces like so many mountain goats), we had to watch out for were wasps. The cold weather had slowed them down, but they were still technically active and were huddled together in small cracks and crevices on the track surfaces.
Before we left this tracksite to check out other exposures, I attempted an artsy photograph of the site... 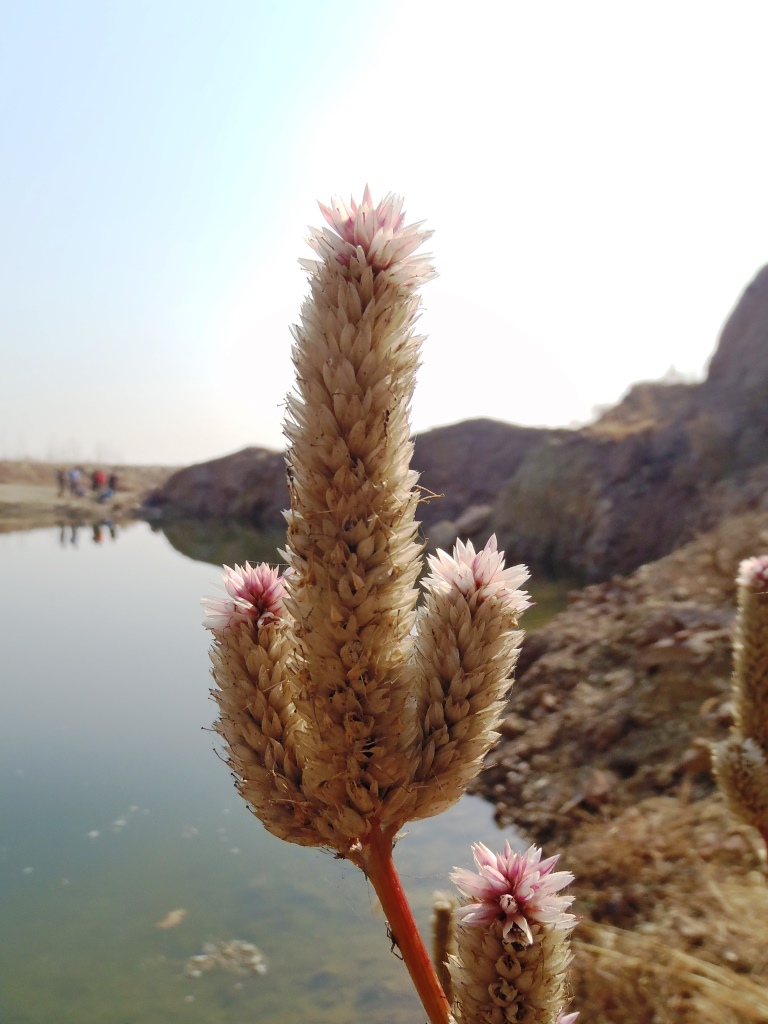 ...to be photo-bombed by Daniel Marty. I love working with people who have a sense of humor! If you are not enjoying yourself while you work, what it the point? 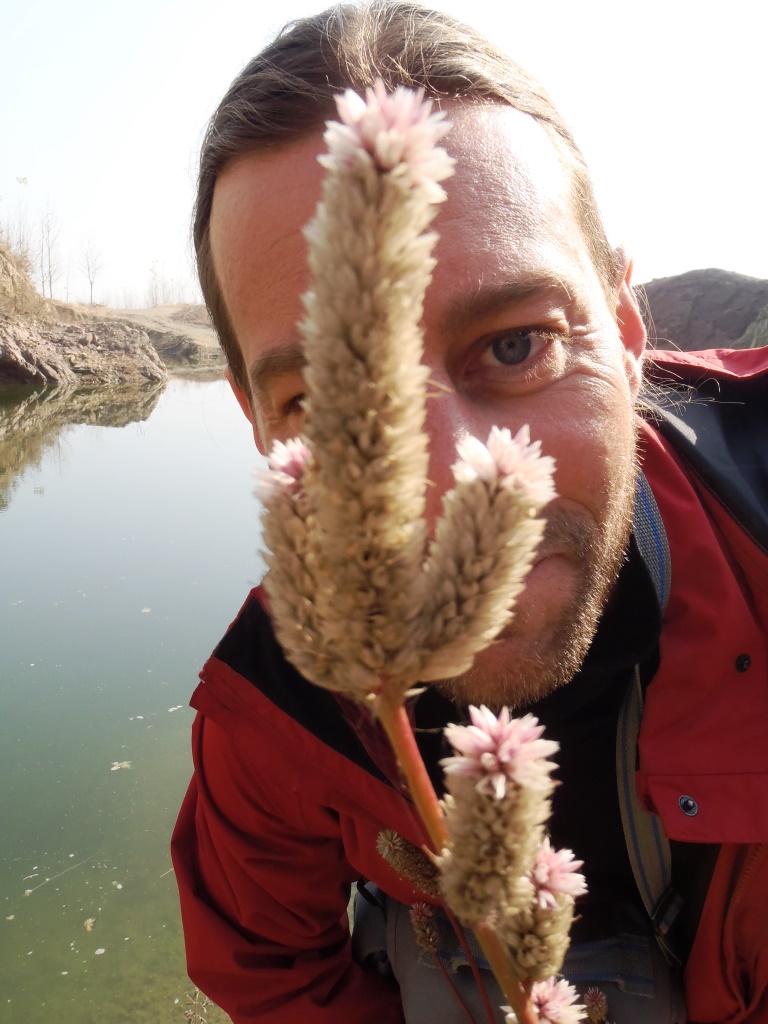 Try as I might, I was still not successful in finding any small vertebrate traces at these sites. My zeal to locate Early Cretaceous bird tracks did not go unnoticed, and the rest of the field team did their best to solve the nonbirdieness of the area.
On our way back to the city we stopped by the village to check out their open air market.
When our guides and local representatives saw that we were interested in local crafts, they took us to the Linyi Kingwillow Arts and Crafts outlet in Linyi City. If only I had luggage space: I do love wicker and willow furniture.

The next day was a travel day: on November 24 we traveled from Linyi City to Chongqing City, for three days at a unique tracksite.